Roger Swanson (Scott) is a character we've all encountered at some point or another. A dislikable guy who considers himself God's gift to women despite an inner self-loathing and generally misanthropic attitude, Roger is someone whom most of us would dodge in real life. On the screen, however, Roger is portrayed with some sympathy, and his self-delusions are shown for what they are. Of course, Roger is too blind to see these truths, but the audience at least feels as though they're one up on Roger. Played with pitch-perfect perfection by Campbell Scott, Roger is a louse, but his wit, good looks, and surface charms gain him social entrées that might not otherwise come his way. The movie's opening restaurant scene, which catches a table of diners engaged in post-prandial conviviality, shows us Roger smartly and amusingly pontificating on the evolutionary death of the human male species. We later learn that Roger has been cut loose from the affair he's been having with his boss Joyce (Rossellini, who has rarely looked more lovely). Adding to his troubles is the unexpected arrival of his 16-year-old nephew Nick (Eisenberg), who wants to learn the art of seduction from his uncle. Thus begins a night on the town as Roger attempts a crash course in wooing women, something he approaches much like he does his job as an advertising executive: Make the subject feel inferior and inadequate and then offer the patsy the solution to his or her problem -- Roger, or whatever else it is that he's selling. Two lovely women (played by Beals and Berkley) are entertained for a while and intrigued by Nick's beguiling innocence. But then they disappear and the movie's third act begins a baffling and not-very-believable character turnabout. Smartly written, Roger's dialogue (by first-timer Dylan Kidd) practically jumps off the screen, earning the writer-director favorable comparisons with that other scribe of male dystopia, Neil LaBute. Further complicating this film's likability quotient is the darkly lighted, hand-held camerawork by Joaquin Baca-Asay. Roger is not a character we are really meant to like, but how much one likes this movie may ultimately depend on the extent to which you are able to remain in the same room with him. 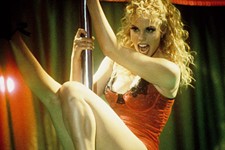 Showgirls
Screenwriter Joe Eszterhas' flimsy and illogical story about Vegas showgirls is a sad excuse for this prurient and purulent tale that nevertheless has its cult adherents.