Like its boffo predecessor from 1994, Santa Clause 2 is an amiable, formulaic holiday romp with the whole family in mind. Director Lembeck, a sitcom veteran, sets 'em up and knocks 'em down, and no fewer than six screenwriters are on hand to tell the continuing story of Scott Calvin (Allen), who assumed the mantle of Saint Nick after the previous Santa toppled off his roof. The Santa coat bestows magic upon its wearer -- but also the responsibilities of delivering toys to all the boys and girls on the “nice list” and keeping Christmas alive. As the film opens, head elves Bernard (Krumholtz) and Curtis (Breslin) discover a hidden wrinkle in Scott's job description: He must marry before Christmas Eve, lest he become “de-Santafied” and destroy Christmas forever, or something like that. His bowl-full-of-jelly belly shrinks to a Pilates-worthy washboard, and his snowy beard recedes. It's easy to imagine the committee of scribes digging around for a scenario with which to goose the movie into motion. Enter stern school principal Carol (Mitchell), the designated love interest who, predictably, refuses to allow holiday decorations and must learn the True Meaning of Christmas (tm) while Scott romances her with Yuletide magic. In case the plot wasn't busy enough, Bernard and Curtis keep up appearances at the North Pole by deploying a mechanical Santa doppelganger (also Allen, with an alarming prosthetic toy face). But as he learns the ropes, will the knock-off Nick become power-mad? Will Scott's son Charlie (Lloyd), a budding graffitist, get kicked out of school? Will Comet, the talking chocoholic reindeer, get his ruminant ass back up in the air before Scott runs out of magic? Like so many children's entertainments, the movie is unnecessarily hyperactive, straining to amuse with a pile-on of contrivances and cheesy CGI whimsy; listening to George S. Clinton's score, which heralds every narrative uptick with a symphonic blast, is like being boxed about the ears. And don't get me started on the infuriating product placement (McDonald's, anyone?) and the reindeer fart joke. Yet there's still much to like for parents and children both. The supporting cast is pleasant, with De Niroesque strongman Art LaFleur as the Tooth Fairy, and comedic workhorses Molly Shannon, Kevin Pollak, and Peter Boyle on hand. Reinhold also returns as Charlie's sweater-clad, psychobabbling stepdad. Allen is fine as the “regular guy” behind all that Yuletide magic, ad-libbing with good timing and cracking wise about Charlie Sheen for the parents in the house. (There's also a scene of ecstatic grown-ups playing with toys from Back in the Day: Toss Across, Mouse Trap, and glow-in-the-dark board game Green Ghost, new from Transogram!) It's as forgettable as sugarplums in your stocking on Dec. 26, but The Santa Clause 2 is sweet enough while it lasts. 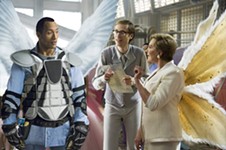