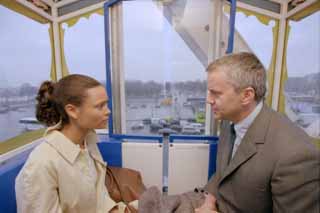 The Truth About Charlie

The Truth About Charlie, Jonathan Demme's remake of Stanley Donen's Charade, is a lovely, ragged thing. The plot, more or less, stands the same: Regina Lambert (Newton) returns home from holiday to ask her husband, Charles, for a divorce -- a moot request, it turns out, as Charlie has already been offed. Trying to unmask the murderer, Regina fumbles about Paris with a whole lot of shady types on her tail: the Commandant, who maybe suspects the widow of foul play; a trio of Charles' former “business associates” sniffing out the $6 million loot Charles stole from them a few years back; an American government type (Robbins), keen to recover the money for Uncle Sam; and, er, a “hunky” stranger named Joshua Peters (Wahlberg), who shows up just in time to offer a helpful hand and a shoulder to cry on. Demme's tweaks in the plot are interesting: There's less damsel-in-distress, more proactive sleuthing from Regina, and much of the malice behind the trio of so-called baddies has been eliminated. Interesting, yes, but you never know how effective George Kennedy with a claw is until he's gone. All of which is to say, Charlie's a bit of a flop in the thriller department. I've seen the film twice now and still can't get it all to shake down; there are too many details glossed over, while others are piled on confusingly, and the final revelation -- where that $6 million is hiding out -- is handled with all the grace of a slammed car door. And yet, I'm not sure I really care. The plot is a pittance, a distraction from the real pull of the piece: its mood. To borrow badly from the French, Charlie has a certain je ne sais quoi that's irresistible. The film presents a dizzying barrage of sights and sounds all perfectly in tune with its Paris setting, from Tak Fujimoto's near-miraculous camerawork to the propulsive soundtrack (World Beat bass and the sweetly soppy Charles Aznavour) and a sound design, layered with jostling crowds, squealing tires, and music heard from far away, as lavished over as the art design, and to just as visceral an effect. There is a tango, of course (how could there not be in a film so fully in love with Paris?), and it marks Charlie's most thrilling setpiece, in which its joie de vivre practically sashays off the screen. As French New Wave cover girl Anna Karina croons at a nightclub, a breathless roundelay takes place, each player cropping up to take a turn at the cheek of Regina. They're all worthy opponents, with one exception -- Charlie's other major stumbling block, the aforementioned “hunky” Mr. Wahlberg. He's all wrong. That estimation isn't out of some petty bias over his drawers-dropping phase, and it's not even in comparison with what came before -- the incomparable Cary Grant. Wahlberg's done good work before, in Boogie Nights and Three Kings, and his high-pitched, little-boy whinny was appropriate to those roles. Not so here. Here, he sounds like a crybaby, and how sexy is that? The role calls for chemistry and mystery; he's a lightweight at the crucial romantic wordplay, and as far as the constant reinvention his character requires, all Wahlberg can muster is a switch from beret to fedora and back again. (Snicker at will -- the audience sure did.) It's a damn shame, because, alternately, I couldn't imagine a more perfect successor to Audrey Hepburn than Thandie Newton. A coltish, almost unbearable beauty, Newton nails Regina's quick changes, from grieving and terrorized to impish and empowered. She carries the picture on her slender shoulders -- not that it's all that much heavy lifting. If success as a suspense is Charlie's chief ambition -- and the audience's chief expectation -- then the film is a disappointment. But as an experiment in mood, as a love song to Paris and to the French New Wave, as a fun, flirty little number, Charlie provides a giddy satisfaction. (See related interview with Jonathan Demme on p.60 of this week's Screens section.)