The Man From Elysian Fields

Is it just me or is Mick Jagger turning into John Hurt? In The Man From Elysian Fields, Jagger plays Luther Fox, the reptilian head of a high-toned escort agency for lonely Southern Californian dowagers and the like, but he's also pulling double duty as Hurt's doppelganger, sporting better hair but much the same sense of Nat Sherman's-and-triple-malted weariness that Hurt's been oozing just shy of forever now. To look at either one is to fathom the age of the universe; at least in Jagger's case he's still sporting the natty threads that, up to a point, marked his stagecraft with the Stones. These days, however, he wears a face that merges the lupine with a phenomenally complex latticework of wrinkles, pocks, and fjord-like maxillary crevasses worthy of the Alps. To watch him is to long for crampons. True to his name, Fox lures Byron Tiller (Garcia), a once-famous suspense author with a wife (Margulies) and infant son, to his somewhat shadowy profession. Tiller, whose single novel Hitler's Child is now fleshing out the local remaindered bin, is desperate for money to support his family -- so desperate that a “temporary” stint as a high-class gigolo seems like, if not a good idea, then at the very least, a serviceable one. The writer-as-whore metaphor may be clunky and obvious (and annoying), but The Man From Elysian Fields has such uniformly excellent performances (including one by another Sixties rock & roll icon, Michael Des Barres, who appears to be doing a Terence Stamp to Jagger's Hurt), and such a ripping outlay of overall talent, that it's easy to overlook the fact that the story itself collapses into a shuddering heap in the third act that goes nowhere that you haven't already predicted in the first half-hour. Tiller's first client, as chosen by Fox, is Andrea Alcott, who just happens to be the wife of multi-Pulitzer Prize-winning literary giant Tobias Alcott (a fantastic Coburn, who ratchets up the film's grizzle factor to almost unbearable extremes), who oddly enough just happens to be Tiller's hero. Both writing and dying slowly, Tobias has no qualms about his wife's bedroom indiscretions; in his worldview a man does everything he can to satisfy his wife (a notion clearly not lost on Tiller), and it's noted repeatedly that the Alcott's marriage is hardly one of convenience. At its heartfelt core, The Man From Elysian Fields is a pointed, often tender, examination of the pros and cons of unconditional love and familial duties. Hemingway is mentioned in passing more than once, and Coburn himself now bears more than a passing resemblance to the writer. Barrel-chested and with a snow-white mane, his Alcott is a man who's outlived his talents. Garcia's Tiller, at the opposite extreme, is a nuanced and subtle role by an actor who usually specializes in quiet, urbane menace. This time, however, it's all about love. 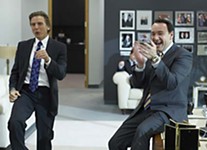 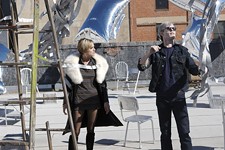