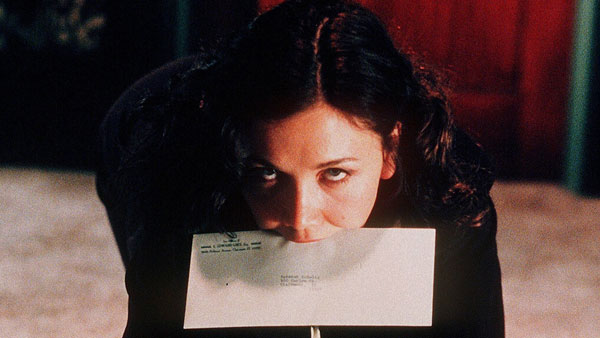 Secretary is a testament to the importance of tonality in telling a story. The filmmakers take tricky subject matter – mutually consenting sadomasochism – and shape a movie that is revealing, funny, erotic, and sympathetic. Secretary affirms the idea that sexual conduct is a personal yet idiosyncratic issue in which individuals must have the freedom to explore personal boundaries and limits. Internalized self-hatred and external disapproval are the enemies here; personal freedom and consensual intimacy are the saving graces. In fact, in its support of sexual self-definition and acceptance, Secretary might be the most genuine "feel good" movie of the season. But it doesn't start off that way. Its characters must emerge from their painful and unenlightened states to arrive at their discoveries. Lee (Gyllenhaal) has been recently released from a mental institution where she has been treated for her physically self-destructive habits. She takes a secretarial job in the office of E. Edward Grey (Spader), an attorney whose baroque office decor only hints at the mysteries within. In time, these two come to discover each other's dark secrets and a tacit compatibility that sparks almost as much fear as release. Each, in turn, seeks out "normality"� before learning that it ain't all that it's cracked up to be. Critical to the success of Secretary are the performances of Gyllenhaal and Spader; without them the movie would be something completely different. In a star-making turn, Gyllenhaal constantly toys with our expectations, alternately switching between cute and bubbly and pained and awkward. It is the almost chaste gusto with which she explores the inner reaches of Lee's character that draws us in and never threatens our fondness for her. Spader, after a career built on playing wily manipulators, is perfectly cast here as a man whose loathing of his hidden desires is taking its toll. These two central performances help focus the tone of the film and keep it light and playful though simultaneously dark and serious throughout. It's a tough act that practically dares itself to work, but director Steven Shainberg and screenwriter Erin Cressida Wilson seem clear-eyed about what they wanted to accomplish. The story is adapted from a short story in Mary Gaitskill's collection Bad Behavior. Secretary challenged its filmmakers, as it does the audience, to find beauty and happiness in some of the most unnerving and unexpected places. Fur: An Imaginary Portrait of Diane Arbus
From the director and writer of Secretary comes this odd fictional biopic about this photographer's impulses.