One character in the Italian hit The Last Kiss announces, "Normality is the real revolution." That's a snazzier way of saying that it's okay to grow old, go to work, and have a family. Certainly nothing revolutionary in that sentiment; problem is, it's plunked down at the tail-end of the picture, when its utter obviousness should have positioned it right at the beginning. That would have saved the film a lot of kvetching, Italian-style (same as kvetching American-style, only louder and with more vino). Carlo (Accorsi) is one of four college friends thick in the throes of a midlife crisis as 30 approaches, the age of settling down. (Kids are trying out sex and drugs at younger ages these days, so it follows that they're having their meltdowns sooner, too.) Carlos' live-in girlfriend, Giulia (Mezzogiorno), is pregnant, a condition that for Carlos represents the end of passion and the end of possibility. Case in point: Best friend Adriano (Pasotti) wastes away in a loveless marriage (the screeching newborn the cherry on top to his "boy, did I get shit on" sundae). The others tread water: Alberto (Cocci) is a dealer with no ambitions but to bed a new woman every night, and Paolo (Santamaria) is reeling from the twin traumas of an ugly breakup and a dying father, whose deathbed wish is for Paolo to carry on with the family business. (There is another friend, who is newly married, but because he is genuinely content with this passage in life, he gets very little screen time.) The four men-who-would-be-boys fantasize about running away to Africa or Thailand in a camper van in search of endless adolescence. Carlos needn't go that far: He thinks he's found the fountain of youth in Francesca (Stella), an 18-year-old high school student as luscious (and fuzzy) as a Georgia peach. Carlos' dilemma -- to cheat or not to cheat (or, perhaps, to live forever in horny adolescent stasis, or not) -- is mimicked by Giulia's mother (screen legend Sandrelli, from The Conformist and Divorce, Italian Style). She already did the settling-down thing; 30 years later, she's aching to start anew. The Last Kiss ably covers a number of characters (aided by the sympathetic, good-looking cast); it is less successful, however, in covering much ground. The film's "never grow up" refrain plays like a broken record, until, in an abrupt (but not unexpected) turnaround at film's end, it fixes itself. That shift actually makes for a very sweet coda, but an odd cap to the film's prior sour sulkiness. 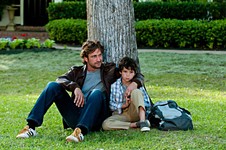 Playing for Keeps
In this all-too-predictable romantic comedy/drama, Gerard Butler plays an ex-soccer star who ultimately reunites with his ex-wife and son, whose team he coaches. 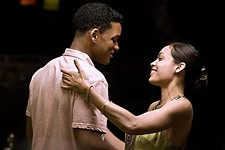