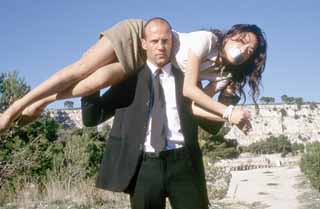 Like the longest BMW featurette Guy Ritchie never made, this action yarn is a slick, sexy little package with fast cars, big explosions, dazzling locations in the south of France, a trip-hop score, and about as much plot to fill a thimble. Despite its promising pedigree -- director Yuen, a prolific and talented Hong Kong helmer, makes his English-language debut, and French fanboy fave Luc Besson is the man behind the screenplay -- there's just not a whole lot of movie in this movie. What we do have is Frank Martin (Statham, the wonderfully laconic leading man of Ritchie's Snatch and Lock, Stock, and Two Smoking Barrels), a fastidious underworld courier who delivers high-risk parcels, no questions asked, in a getaway car so tricked out it makes James Bond's Astons look like Polish taxicabs. His backstory literally fits inside a box, all the better for another character to unearth it in the second act: childhood snapshots, Medal of Honor, yadda yadda. But when he breaks his cardinal rule and inspects a package in his trunk, he runs afoul of Wall Street (Schulze), a dude-you're-gettin'-a-villain kind of guy generically in cahoots with a nefarious Chinese businessman (Kwai, whose pancake seems to have been applied by a mortician). Meanwhile, a local detective (Berléand) sniffs around Martin's impossibly gorgeous oceanfront manse, with its rustic furnishings, sun-kissed, limewashed walls, and secret passages, in search of a rat. Throw in a perfunctory love interest (Shu, who adds a nice down-to-earth quality to her broadly written babe role) and some egregious product placement (Orangina, anyone?), and you're all set. Let the explosions begin. To be fair, the action sequences (and there are many) are staged with verve and consummate professionalism, and Statham is physically up to the challenge of the part. For an arthouse actor, he's got quite a flair for ripping off his shirt dramatically (and, in one instance, using said garment as a weapon). Yuen's background in the Chinese Opera is evident in the fight scenes, which are typical of the Hong Kong style: random articles like bicycle pedals, a tire tool, motor oil, and the aforementioned shirt figure cleverly into hand-to-hand smackdowns that are smoothly filmed. After one ambitious set-piece, I was uncharacteristically inspired to scrawl in my notes, “This movie kicks ass!” So why does Berléand -- who putts around town in a farty old Saab, has a Galoises-and-butter physique, and doesn't land a single punch -- almost manage to walk away with the picture just by sitting around eating breakfast? Maybe because he's actually got the cerebral glimmer one expects from a Besson hero. He seems to be standing outside the paint-by-numbers landscape of what is, on reflection, a fairly average effort. 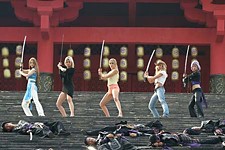