Middle-aged commercial real estate agent Benjamin Floss (Hoffman) asks his attorney why his daughter was caught in the crossfire of an anonymous domestic dispute in a diner, asks why his daughter is now dead. The attorney replies helplessly: “Because she was there.” A little half-smile hangs on Ben's face -- he is a polite man, an ingratiating man, a salesman, and a smile is second nature to him. But this smile is something different. It hangs on too long, inches into something ugly, a silent signpost of a man reeling from too many emotions to give in to just one. The moment lasts only a few seconds, but it's singularly the purest form of grief to be found in the well-intentioned but unsuccessful Moonlight Mile. Writer-director Brad Silbering (City of Angels) drew from experience here: His then-girlfriend, TV actress Rebecca Schaeffer, was murdered in 1989, and Moonlight Mile was inspired by the post-tragedy connection he forged with her parents. His stand-in here is Joe Nast (Gyllenhaal), the fiancé of the murdered Diana. Joe had intended to partner with Diana's father, Ben, in the real estate business; in the wake of her death, Ben pushes through with the plan, lettering his sign “Floss and Son” the day after her funeral. Joe sleeps in an extra bedroom at the house of Ben and wife JoJo (Sarandon), and together the trio forms a makeshift family to fill the hole where the previous one once was. Silbering juggles a lot here -- the individual mourning of the three, the impending trial, a real estate venture, and Joe's tentative infatuation with a local girl named Bertie (Pompeo), who is also grieving a loved one lost. Some of the plotlines are busywork -- the trial and the real estate deal are both busts dramatically -- and Silbering's film rarely achieves the visceral punch of that half-smile on Hoffman's face. The actors all do powerful work here -- Sarandon is especially devastating as the acerbic JoJo -- but their fine performances are undermined by too much pretty speechifying. The script's volubleness gives off the uncomfortable sensation that these are people talking about grief rather than feeling it -- a fault felt most keenly when the attention is on Joe (and the attention is predominantly on Joe). There's very little bite to Joe (outside of a masterful crack-up at a formal dinner with clients); perhaps Silbering was too close to his doppelganger to give him the necessary complexity. Joe's role is a passive, mostly mute one; that, coupled with Gyllenhaal's sleepy-eyed good looks, give the impression that Joe is more asleep at the wheel than wading through guilt, grief, and turmoil over finding a new love. Moonlight Mile isn't a wash: In addition to the strong performances, the script is teeming with lovely, knowing moments, and the camera moves artfully. Whole scenes are enlivened by the terrific assemblage of period songs -- from Sly & the Family Stone, Elton John, and Van Morrison (whose “Sweet Thing” caps the film beautifully) -- but the soundtrack is also the only forceful indicator of the era Moonlight Mile inhabits: Its Seventies setting is never fully realized. It's the mark of a certain vagueness -- an inability to commit and follow through -- and that vagueness dogs the entire picture. An admirable effort, but too many words, words, and more words, and not enough of the ache of that half-smile. 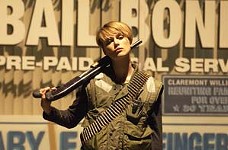 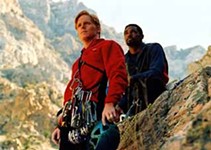 The Climb
This well-intentioned drama, produced by the Billy Graham Evangelistic Association, leaves no cliché unturned as it charts the path of a cocky mountain climber (George) ...