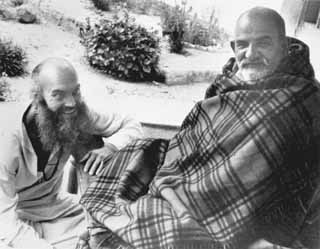 Richard Alpert started life in 1931 as a nice Jewish boy. He grew up to be a doctor, the Ph.D. kind, and served on the psychology faculties of Stanford and Harvard. There he heard the rambunctious call of university colleague Timothy Leary to turn on and tune in with psilocybin, LSD, and assorted other consciousness-raisers. But instead of dropping out, Alpert's journey into expanded consciousness led him to India, where he studied yoga and meditation and met his guru. Soon Richard Alpert, the fired Harvard professor, blossomed into Ram Dass, spiritual teacher to a Sixties counterculture that responded to his invitation to “Be here now,” as his best-known book was titled. During the early Seventies, Be Here Now was this nation's bestselling book after Dr. Spock and the Bible. Unfortunately, the movie Ram Dass: Fierce Grace plays like an untidy publicity piece for the spiritual teacher's current book: Still Here: Embracing Aging, Changing and Dying. Ram Dass has devoted his most recent studies in consciousness to the process of aging. But in an unexpected slap in the face to the idea of formulating life plans, Ram Dass' recent life course was altered by a stroke that left him with some expressive aphasia and partial paralysis. Instead of learning to age, Ram Dass is now learning to walk. Ram Dass is fairly nonchalant about having been “stroked,” as he calls it. Yet Fierce Grace has the flavor of substitution for the regular radio show that Ram Dass was about to embark on before getting “stroked.” The film begins with footage of him that makes clear his current physical limitations before delving into biographical background that shows the journey of Richard Alpert to Ram Dass. On this score, the film makes fine use of a wealth of vintage footage, using it as background to the various reflections of Alpert family members and others who describe the experiences of the late Sixties and early Seventies. We also witness a few instances of the way Ram Dass' spiritual path of service and compassion have helped to ease the suffering of others. The film affords us intriguing glimpses of the insights gleaned from a lifetime of spiritual inquiry, but Ram Dass: Fierce Grace doesn't organize it with any particular insight. The movie probably offers little but cursory understanding to novices in the Ram Dass spiritual journey, but to those familiar with the work of this teacher will likely find the movie like a tune-up visit with an old traveling companion.