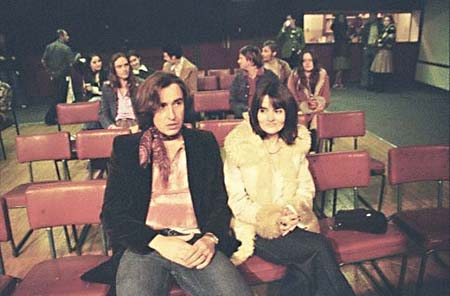 It doesn't matter if you think Joy Division is queer math, or if your knowledge of New Order is limited to various fringe elements that don't want the world to be run by it, or even if you're one of the few, the proud, the terminally out-of-touch who still think a “rave” is something Buddy Holly sang about. 24 Hour Party People -- which cheekily touches on all the above to one degree or another -- is one of the most purely entertaining films about (for want of a better term) pop music in years. Mixing the hedonistic comic folly of Trainspotting with the sort of dry, wry British wit usually found stateside on various BBC America programs, 24 Hour Party People is the story of Tony Wilson, a young charisma-dripper and bon vivant who, in the late Seventies, founded Factory Records, and from there forever altered the musical landscape of Great Britain (and the world). Hyperbole was Wilson's stock in trade, but it's no great exaggeration to say that for all his disastrously flawed business acumen (he eventually ran his label straight into the ground -- to his credit, it took him more than a decade to do it) and certain personal proclivities that ended up ruining one marriage and several friendships, Wilson the promoter was in style and substance much like that other great English showman-cum-lunatic, Malcolm McLaren, who crafted the legendary Sex Pistols. Early in the film we get to see Wilson at an early (and spottily attended) Sex Pistols gig. British comic Coogan plays Wilson with a charming, immensely likable drollery (you can tell he's a cad by the way he gets a quickie from a hooker in a car park), but like his long suffering wife, you stick with him. He's going places, obviously, and where he might end up is anyone's guess, but the ride certainly looks like fun. At the Pistols gig, Coogan turns to the camera and, knocking aside that annoying fourth wall, lists the soon-to-be-legendary members of the tiny audience: There was almost no one there, he says, but every one went on to make his own major contribution to the British musical scene, including Howard DeVoto of the Buzzcocks and Mark E. Smith of the Fall. Wilson's lengthy career (still going strong, by the way) is charted post-Pistols. He founded and ran Factory Records, which relied on a no-contracts policy and gave its artists absolute control over every aspect of their work. Some of the legendary bands included Joy Division, New Order, and Happy Mondays. Wilson ran the (in)famous Manchester club, the Hacienda, and generally set the global tone for dance music and white-boy funkiness in the Eighties and beyond. The other major character in Winterbottom's film is the city of Manchester itself, a sprawling, sooty industrial center that to this day, thanks in large part to Wilson's efforts, remains the epicenter of global cool (so much so that it gained, in the late Eighties, the name Mad-chester). Quoting bits of Situationist dogma and comparing the lyrics of mindless drug hoover and Happy Mondays frontman Shaun Ryder (Cunningham) to Keats, repeatedly, Wilson bluffed his way to fame and fortune and, of course, eventual financial ruin. Winterbottom's film is a paean to the days and the scene before the fashionistas regularly hung with the rockers, a peculiarly innocent time that in hindsight seems about as innocent as Jean Genet in heat. Loud, hilarious, and enormously entertaining, 24 Hour Party People makes you want to toss current FM radio out on its pre-fab, corporate-sponsored backside. And not a moment too soon.