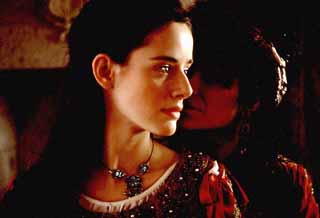 Like a paperback romance, this costume drama about the marriage between Joan and Philip, the King and Queen of Castile, is pretty to look at, tamely racy, and fairly fluffy, despite its two-hour running time. Not for nothing was Joan known as “the Mad”; not for nothing was Philip known as “the Handsome.” When the two wed in 1496, Joan's fiery passion for her Hapsburg bridegroom burned her to a nub, catalyzed by Philip's philandering and the death of Joan's mother, Isabella of Castile. Meanwhile, Philip and his Flemish toadies wrested power from Joan by giving her the Frances Farmer treatment. Spanish writer-director Aranda opens his story with a bookend sequence set in the convent in Tordesillas where Joan lived out her days after being declared insane. This conceit sandbags the story, as does the clunky voiced-over exposition, whose dire intonations about betrayal effectively lay out the plot of the film before the first scene is over. In flashback, Isabella (Sanchéz) shuttles daughter Joan (López de Ayala) off to her arranged wedding in Flanders with a pragmatic goodbye. Little does she realize Philip (Liotti) is a hunk with washboard abs and a libido so overactive he carries Joan off to his chambers -- literally -- after their official introduction. But while Joan is ferociously, destructively devoted, Philip proves unable to keep the family jewels in his royal pants, particularly after he spies Moorish hottie Aixa (Arcuri) dancing at the 15th-century equivalent of Dirty Dan's Pure Platinum. Insane with jealousy, Joan becomes an easy mark for the machinations of Philip and his nefarious counselor (Gemma). As one might expect, the settings and costumes are gorgeous: Aranda dives with gusto into wide-angle long shots of the verdant plains of La Mancha and his cast-of-thousands extras. He's also scored a hit with López de Ayala, who is fully invested in her role and quite enjoyable, even as she's made to run about in the rain, screaming, in a mad scene whose dramatic pitch goes all the way up to eleven. But Mad Love is a soap opera at heart, albeit an accomplished and particularly attractive one. Liotti, an Italian television actor to whom the word “studmuffin” amply applies, kind of looks like Kip Winger on stage -- all the better for Joan to narrow her eyes and spit, “I want to love you even if you loathe me!” Aranda, a prolific screenwriter and director with his roots in the juicy Eurohorror tradition, makes a few broad gestures at positing Joan as a proto-feminist heroine, railroaded by her father and husband. But he's most at home with high drama, so Mad Love plays more like a period-piece potboiler that's too long and too stately to be good old-fashioned pulp.