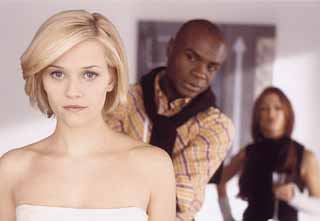 Sweet Home Alabama hooks itself on the idea of geographical ambivalence -- ironic then, that the film was mostly shot in stand-in (Sweet Home) Georgia. But not inappropriate, because that confusion -- over where exactly home is -- is the biggest stumbling block to the soul of the film. The romantic comedy opens with the successful New York launch of the new fall line from Melanie Carmichael (Witherspoon), a transplanted Southern belle touted as the next big thing in the capital of haute couture. Melanie has also landed a marriage proposal from Andrew (Dempsey), a well connected, expertly coifed (think JFK Jr.) politician and son of New York's mayor (Bergen). Melanie says yes, with reservations: She has some unfinished business back home in Alabama, a place she left seven years prior with all the reluctance of a death row inmate narrowly escaping the noose. Problem is, she didn't just flee podunk Pigeon Creek, or her real roots -- redneck parents, a childhood (trailer) home, and the unfortunate surname of “Smooter.” She also fled a husband, Jake (Lucas), who Melanie married right out of high school and shortly thereafter ditched for the big city. She hasn't much looked back, except for the divorce papers she air-mails Jake at regular intervals, divorce papers he just as regularly refuses to sign. But with the clock ticking on her impending nuptials to another man, Melanie stomps back to 'Bama to end the damn thing once and for all, and it's here, back in the Deep South, that both Melanie and the film spring to life. The script surprisingly skimps on most of the canon of “colorful” small-town types; what emerges instead is an earnest, affectionate portrait of a town that refuses to keep pace with the rest of the world. It's easy to see why Melanie would tear out of town like a bat out of hell, and it's just as easy to see why the Pigeon Creek locals would just as soon stay put. The cast is mostly top-notch, although too much time is wasted with the dull-as-dirt Dempsey and Bergen (who might as well have phoned in her performance as a scheming matriarch from the Miss Congeniality set). The film's funny bone is much better served by its Southern regiment, with nice turns from sassy-as-ever Jean Smart (Designing Women), Heavenly Creatures' Melanie Lynskey, and goofy Ethan Embry (who last worked with Witherspoon on Disney's 1993 little gem, A Far Off Place). As the warring mister and missus, Lucas and Witherspoon are irresistible, their verbal sparring recalling no less than a less-civil Cary Grant and Irene Dunne (who had a similar case of domestic disturbance in The Awful Truth). Witherspoon doesn't stretch as much as she did in the farcical Legally Blonde, but she's still all service with a smile, and Lucas -- blessed with the same drawl and the same drollery as Matthew McConaughey -- has leading man stamped all over his scruffy, bearded self. But there's still that issue of geographical ambivalence. Time magazine recently reported that some of the racier jokes were excised during editing, and I wonder what we've missed. The film plays pleasantly enough, but rarely cuts loose with the rowdy abandon of the song that inspired it. What it needs is a little more dirtying down. What it needs, in short, is less New York, and more Alabama. 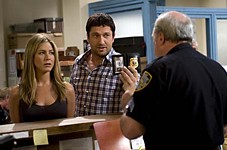 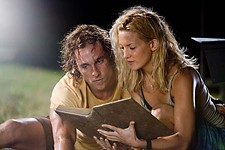