You can't help but root for Heath Ledger as he meanders between the dunes and the Sudanese wastes, sunburned and blistered and despised by the very men he's so desperately trying to help. It's terribly difficult, after all, to catch up to Wes Bentley's career, post-American Beauty. It's clear however, that between last year's Monster's Ball and now the lead in this, the seventh screen treatment of A.E.W. Mason's 1902 potboiler, Ledger is trying to distance himself from the Aussie sensation-of-the-year shrillness that attached itself to him after 10 Things I Hate About You, and to a lesser degree The Patriot. Contrary to some publicists' musings, he's not the new Mel Gibson (although I could easily see him in an updated version of Tim), but he does have a similar sort of self-deprecating charm. For the uninitiated, Mason's novel of derring-do revolves around the sorry lot of Harry Faversham (Ledger), a British soldier in the 1880s who appears to live a charmed life: He's the son of a war hero, he's the best soldier around, and he's just become engaged to his lady love Ethne (Hudson). Alas and alack, an uprising in the British-controlled Sudan is sending him to the front in a matter of days, and, choosing life, he resigns his commission in the name of love. Unfortunately if predictably, he is branded a coward and given a symbolic clutch of chicken feathers by his three former best mates. In shame, he skulks off while his comrades go to war and suffer hideous losses. Determined to win back his good name, Faversham travels alone to the Sudan, and on the way befriends the native Abou Fatma (Hounsou) after almost dying amongst the dunes. Honor and redemption ensue. Melodramatic and Victorian in the extreme, The Four Feathers is the sort of resolutely British tale that's rarely been seen since the sun set on Queen and country. As Hollywood updates go, The Mask of Zorro this isn't, and although this film version veers from Mason's novel in several aspects, it still borders on Merchant-Ivory territory, with much noblesse oblige and Hudson's (well-played) demurings. Bentley, as Faversham's best friend Jack, outdoes Ledger in almost every respect -- his is the ambiguous moral center of the film. (Although Ledger's Faversham, with a character arc nearly as twisty as the Sudan's shifting sandbars, is not easily dismissed; he also ends up looking, unintentionally I think, like John Walker Lindh.) Kapur, who directed Elizabeth, has a knack for battle scenes, with the outflanked and outnumbered Brits being cut down on all sides by rushing hordes of Sudanese. The film's other great strength lies with the cinematography of Robert Richardson (a longtime associate of Oliver Stone), whose panoramic shots of the burnished African desert are epic in their sweep and sway, and which contrast nicely with Faversham's cloistered British home. Ultimately however, The Four Feathers offers too small a dose of the blood-and-sand adventure you expect from this sort of big-budget Hollywood remake. As it is, it borders on The English Patient's on again-off again heroics, minus Anthony Minghella's patient skill in eliciting romantic suspense. Faversham is no T.E. Lawrence and this Sudan is no Arabia, either. 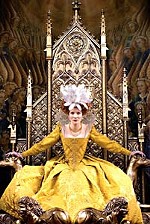 Elizabeth: The Golden Age
Cate Blanchett as Elizabeth I is back for seconds in this melodramatic sequel that emphasizes how the Virgin Queen lusted in her heart.