Its heart, at least, is in the right place. In an industry that promotes an offensively short shelf life for its female practitioners, The Banger Sisters provides a showcase for two of Hollywood's finest non-ingénue actresses. The film even tries to say something meaningful about the aging process. Tries, mind you: The resultant film is all surface and plush, with nary a hard edge or demanding note. Despite the movie's well-intentioned heart, its head is out to lunch, neglecting its responsibility to provide these powerhouse actresses with a script half as smart or compelling as they. Hawn plays Suzette, a onetime groupie of the Stones and the Doors who is fired from her longstanding bartending gig at L.A.'s Whiskey-a-Go-Go. The layoff is bad enough; the real burn, though, comes when the nearest rocker opts to get his requisite blow job from a chippy 30 years younger than Suzette. Piss-poor and shaken to the core, Suzette sets out for Santa Fe to hook up with her old friend, Vinnie (Sarandon), the other half of the legendary Banger sisters. Twenty years ago, together they were rock-cock conquerors who pleasured the likes of Jim, Keith, and Pete, and (in one of the funnier set-pieces) have the pictures to prove it. But Vinnie has morphed into Lavinia, prim mother of two, dutiful wife to a lawyer with political aspirations, and society member with no interest in recollecting her youthful days. Good thing Suzette's around to jolt her memory. Rush turns up, too, as a failed screenwriter undone by nervous tics and a decade of not getting laid. He'll have to get in line with all the others who Suzette is here to save from the doldrums of decorum. There's no question, of course; The Banger Sisters is meant to be a movie of transformations, yet there's nothing transformative -- or suspenseful -- about it. Saddled with an uninspired, intermittently amusing script, Sarandon and Rush do good work here, and Hawn is clearly having a blast as the smoky-voiced Suzette. There's never any doubt that she can still rock. But The Banger Sisters -- soft, safe, barely there -- is more like easy listening. 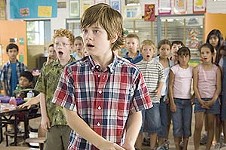 How To Eat Fried Worms
This kids movie, which was filmed in Austin, is not as wormy as it sounds.