More likely to produce titters than anything approximating a shiver, this Fatal Attraction retread for the high school set promises thrills galore but delivers only limp non-frights and predictable yawns, despite the fact that pouty Traffic star Christensen remains immensely easy on the eyes. Ditto, I suppose, for Bradford (Clockstoppers), whose generic good looks rival Freddie Prinze Jr.'s in the "Hey, don't I know you from somewhere?" department. Looks alone can't save Swimfan from a slow-death gurgle in the (very) shallow end, however, and by the time the jarringly ridiculous third act splashes down it's all you can do to refrain from hollering "Marco Polo!" at the screen and hightailing out of there. Bradford is Ben Cronin, a high school swim champ with a few skeletons in the closet -- he was once involved in various felonious activities but managed to turn his life around thanks to the butterfly stroke and the love of good-girl paramour Amy (Appleby). Dividing his time between the pool, the girl, and the hospital where he works as an orderly, this all-American shmoe barely has time to notice new-girl-on-campus Madison Belle (Christensen), who, in an alarming bit of predatory focus, zeroes in and promptly wangles a poolside romp when Amy's not around. You can tell something's amiss when in the heat of the moment she urges Ben to "Tell me you love me ... you don't have to mean it, just say it." Ben, caddish and more human for it, is clearly aware of his error in letting Madison get in his trunks, but he's aghast when the steely-eyed vixen fails to take no for an answer the next day and promptly lays waste to his entire life via an inexplicably arranged series of plants, deceptions, and evil feminine wiles that culminate in murder. Really, you'd think the first time this guy had seen Madison's 1,000-yard stare and terminal disconnect he'd have fled the other way (or at the very least claimed blondes make him retch). Like its script, which nurses plot holes gaping enough to pilot an entire Olympic swim team through, the characters in Swimfan seem motivated by nothing short of dull, brain-deadening hangover, their minds at perpetual half-mast; all except the evil temptress, who's firing on all cylinders when it comes to mayhem and ruining an easily swayed testosterone case's chances for gold-medal glory and true blue love. Why it took no less than nine producers to shepherd this film to the screen is anyone's guess. The film's rapturous, deep-blue cinematography comes courtesy of Giles Nuttgens, whose previous film was, oddly enough, The Deep End. No such colorful metaphors here: This one is strictly for kiddie waders. 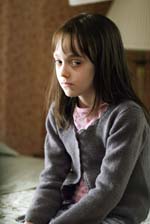 Hide and Seek
John Polson's psychological thriller about a father (Robert De Niro), daughter (Dakota Fanning), and the creepy goings-on in their house in the woods dangles over the precipitous edge of awfulness a full 90 minutes before toppling into that abyss with a resounding clatter.