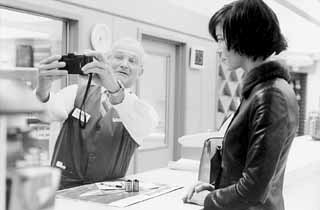 One Hour Photo offers a very interesting snapshot of some decidedly modern pathologies -- suburban alienation and the illusions generated by the advent of the photographic image. Robin Williams also gives the dramatic performance of his career so far as Sy Parrish, the manager of the photo counter at a local SavMart, one of the large, anonymous shopping meccas found in towns and countrysides across the land. And acclaimed video director Mark Romanek (Nine Inch Nails' "The Perfect Drug" and "Closer," among other striking videos) is definitely onto something with One Hour Photo, his first feature film. Writer-director Romanek's sense of composition, editing, color patterns, and visual symbolism are all outstanding, and these, along with Williams' stellar performance, effectively generate the seriously creepy mood that hangs over this movie. Dramatically, however, the characters and the film's denouement are seriously underdeveloped, leaving us feeling as though we've witnessed an exposure that is more the result of a chemical photo process than a guided insight into what lies behind the two dimensions of the image. Sy Parrish runs the SavMart photo counter as if it were his own little island where customers come to visit and leave him intimate little offerings from their lives. For what is more personal than our photos? These are our memories made tangible and the keepsakes we leave behind. Yet we share them with the strangers working at the photo booth. To its credit, One Hour Photo makes us wonder about all those familiar strangers in our lives -- the counter clerks and service industry workers with whom we make small talk and see regularly but never really know in any significant capacity. "Sy, the photo guy" is one of these characters. Always with a friendly word for his customers, he anticipates their needs and feels as if he is a part of their lives. He's fastidious and usually dressed in beige attire and quiet-soled shoes, blending into his bright fluorescent atmosphere like a camouflaged cancer. We come to see that Sy has fixated on the Yorkin family - husband and wife Will (Vartan) and Nina (Nielsen) and their tow-haired child Jake (Smith). Whenever he develops their frequently dropped-off family photos, he makes an extra set for himself and envisions a fantasy world in which he's Uncle Sy, a beloved member of the family. Well, as Homer Simpson says in the TV background of an early scene, "It's always the guy you least suspect." Romanek's methods of showing us the depth of Sy's delusions are effectively conveyed through a couple of tour-de-force camera shots. What he does not manage to convey are the reasons why Sy's disturbance has passed beyond a generalized anomie into an all-out pathology, and why the Yorkin family in particular appeals to his sickness. It could very well be that they seem to be his biggest customers, stopping in with a constancy that satisfies the story's needs more than any pretense of believability. The Yorkins are also a frustrating trio as the story never treats them as substantive characters; they're merely the unwitting pawns of Sy's dementia. Furthermore, the story's conclusion borrows a page from the unsatisfying psycho-babble ending of Hitchcock's Psycho. One Hour Photo makes us look forward to Romanek's next picture and gives us plenty to ponder in the meantime. The next time out, though, we hope Romanek allows his exposures a little more time to develop. 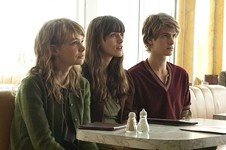 Never Let Me Go
The children in this story are born into a system that values them for their disposable body parts, not their discrete personalities.