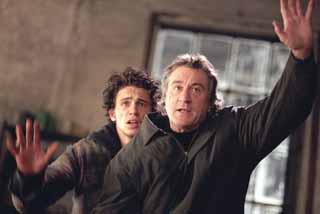 City by the Sea

The theme of parental guilt is laid on thick in the psychological drama City by the Sea, nearly to the point that it suffocates the movie. One more accusatory remark about how distinguished cop Vincent LaMarca (DeNiro) walked out on his estranged son Joey (Franco), now a strung-out junkie sought on two counts of murder, and you might find yourself wanting to follow Vincent's lead. Primarily set in the decaying New York boardwalk resort of Long Beach, City by the Sea means well in its depiction of sons paying for the sins of their fathers, but it overcomplicates the emotional framework of its story with excess baggage. For instance, why is it necessary for Joey to be accused of killing DeNiro's kind-hearted partner and close friend, as if the paternal remorse level in the film isn't high enough already? And what's this business about Vincent's father getting the electric chair years ago for the accidental death of a kidnapped baby, as if that fact gave Vincent's character some kind of value-added depth otherwise missing from the movie? Director Caton-Jones occasionally finds the essence of the film's story, which is based on a nonfiction article that appeared in Esquire a few years ago, but all of the plot shenanigans ultimately undo whatever truth he uncovers about how the past always informs the present. Everything truly falls apart in the film's sloppy resolution of the long-simmering familial conflict, which takes place during an armed showdown with the police. The bullets and recriminations fly and, before you know it, a father and child reunion is only a motion away. While Franco does a convincing job in his portrayal of the anguished Joey, the most interesting character in the film is performed by McDormand, relegated here to the thankless slot of playing girlfriend to the male protagonist. The development of Michelle's relationship with Vincent reflects his slow emergence from the cocoon in which he's long encased himself, so it's with some shock and sadness that she abruptly exits the film about two-thirds through, as if she were something expendable. Forget the guilty conscience and self-reproach in City by the Sea -- the biggest shame in this movie is how it wastes Frances McDormand. 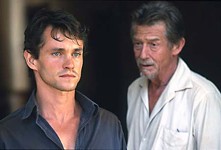 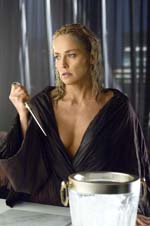