Swimming opens and closes with one summer spent at Myrtle Beach, a summer bookended by what comes before and after in the life of Frankie Wheeler (Ambrose). Before this summer in Myrtle Beach, there were just more summers of serving up burgers and fries to swimsuited tourists at her parents' boardwalk diner, now owned by Frankie and her married brother, Neil. And after -- well, that's really rather the point of Swimming: to determine what will come after for Frankie, be it more burgers and fries or something else. This modest indie effort, which made the festival rounds two years ago and now enjoys a limited release (most likely due to lead Lauren Ambrose's visibility on HBO's Six Feet Under), is not terribly evocative, skirting around rather than diving headlong into the bustle of a tourist town in mid-swing. Budgetary restrictions no doubt limited the number of sets involved, which means there's a lot of bouncing from beach to restaurant to the piercing shop next door and back to beach again. But that staticness does serve something beyond the budget: It reinforces the sense of four-walls-closing-in-fast that quietly dogs Frankie. She longs for her own car, and that tantalizing kiss of freedom only a set of wheels can promise a 17-year-old. But her brother's been stiffing her on the restaurant's receipts -- and where would she go anyway? -- so mostly Frankie just sits around with her lifelong best friend, Nicola (Lowe), wondering what to do with the evening. The answer is, inevitably, not much, but then two strangers roll into town (separately) and offer some new nighttime options. Josee (Carter) is the new waitress -- and a very bad waitress at that, but a terrific flirt -- and Heath (Harrold) is the goofy stoner who sells tie-dye T-shirts out of the back of his van and dreams of an Airstream. Both of them vie for Frankie's attention, to the surprise of Frankie and the consternation of Nicola, used to being the popular, pretty one. Not much happens beyond this slim sketch -- there are first kisses, fights, and reconciliations, all designed to nudge Frankie toward knowing what to do with herself. And that's a tough one: Outside of that dream of a car, Frankie has no discernible ambitions, which is not to say she is shallow. She's simply inscrutable. In a town of tanned brown revelers in bikinis and surf shorts, Frankie is a pale thing in baggy overalls worn like a protective casing. She has an appealing “screw you” blasé to her that distracts from how frightfully timid she is (why and of what are never adequately addressed). Ambrose, a gifted and charismatic actress, brings all she can to the role, and in a confrontation between Frankie and her brother, Ambrose swells up, angry and righteous, yet her voice betrays that she is two seconds from a sob. Ambrose owns this crawlspace between being fierce and being fragile. But she can't escape the fact that her role is underwritten; the script suffers from an excess of subtlety (which beats the alternative, sure): So subtle, in fact, that by the end, that most essential question -- what will Frankie do tonight and every night after -- is met with no more than an indifferent shrug. 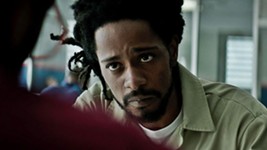