Timed to coincide with the similarly themed M. Night Shyamalan film Signs, this exhaustive (and exhausting) look at the peculiarly British phenomenon of crop circles -- those tamped-down geometric patterns that make seemingly random appearances in Midlands farmers' fields every year or so -- offers a wealth of information cloaked in the guise of scientific research. The fact that the dubious nature of many of the circles was revealed several years back by a number of self-proclaimed “hoaxers,” both here in the U.S. and in the U.K., is virtually ignored by Gazecki's documentary, thereby creating a certain skepticism regarding his research. (In 1999, the BBC held its own pseudo-scientific investigation, the centerpiece of which was a young kid tramping through a field with a flat board attached to his feet who managed to come up with some nifty faux-circles of his own. So much for alien intervention.) Gazecki, who scored an Oscar nomination for his documentary Waco: The Rules of Engagement in 1997, clearly knows his stuff when it comes to ley-lines, ancient Celtic peoples, and the various and sundry oddball personages that make up the backbone of crop-circle researchers, but for all its breathless excitement and earnest believers, Crop Circles comes off as less a “quest for truth” than an extended example of preaching to the converted. Shockingly, there are no rebuttals or opposing viewpoints on display, which renders the whole film about as valid and honest as those obscure JFK assassination videos that pop up on the Internet from time to time. That a two-hour film could cover every single aspect of the crop-circle phenomenon except the fact that the whole thing -- or even a substantial part of it -- might well be an elaborate hoax, is nearly as mind-boggling as the pesky circles themselves. Instead, Gazecki conducts interviews with select members of the pseudo-scientific inner circle, including pilots who fly over the circles to snap aerial photos, authors on the subject (like Lucy Pringle, who speaks of the sudden appearance of interconnecting shafts appearing between various circles by saying “The sheer wonder and magic and excitement was almost too much to bear.”), and the odd biophysicist like University of Michigan's William Levengood, who's the researchers' go-to guy when it comes to genuine analytic testing of battered wheat shafts. This isn't to say that the film or its subject are uninteresting or unworthy of further study -- they are. But this one-sided and heavy-handed exploration feels like pure bunk, which only serves to undermine the case for real study of the phenomenon. It's deadly serious, to boot, although it's difficult to know how to take things when so many people use the word “magic” to describe the circles, even as they hunker down in a boggy field with tape measures and magnetometers at the ready. Complex in their design and by all accounts geometrically precise, these gigantic, football field-sized circles of ruined farmland are bizarrely captivating; it's a shame, then, that the subjects of Gazecki's film come off as so many quasi-mystical loonies. 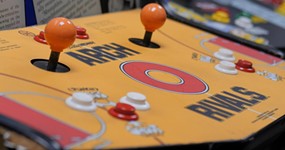