Fans of Terry Gilliam's early film work may find themselves experiencing no small amount (5' 5", really) of cinematic déjà vu upon viewing Taylor's adaptation of the novel The Death of Napoleon by Simon Ley. Gilliam's 1981 film Time Bandits featured actor Ian Holm as the diminutive French leader Napoleon Bonaparte, and here he is once more, hat and all, scheming a return from exile on the island of St. Helena and finding his plans scuttled by the fickle whims of fate yet again. Droll romantic comedies revolving around world leaders are rare things these days and, as such, not to be taken lightly. That Holm, an actor who really does resemble the emperor (and Bilbo Baggins) in at least the physical, has returned to the part adds a bit of heft to what is otherwise a sweet but slight film. His Napoleon is the gruff, taciturn warrior king, bloodied but unbowed in the face of his English captors, forced thus far to live out his remaining days on St. Helena surrounded by a coterie of servants and allies imprisoned alongside him in a well-appointed home atop the mountainous isle. When a plan is hatched that involves a double -- Eugene Lenormand, also played by Holm -- who will take Napoleon's place on the isle as the real emperor is spirited away, incognito, to France, and from there to his rightful place with his countrymen, it feels for a while as though we're reviewing history by way of Mark Twain, a Prince and the Pauper reimagining with lovestruck overtones. Once the emperor arrives in Paris (after traveling below deck on a cargo ship, during which a black crew member introduces him to the breathtaking splendor of the topside sunrise and his first taste of freedom in years), the impostor on the island, predictably, opts not to reveal his true identity, and instead continues the pleasurable charade while dining in and enjoying good (if confined) life. This leaves Napoleon little choice but to try and stir up revolution on his own, and though his fiery oratorial skills serve him well at first, it quickly becomes clear that the townsfolk are unlikely to rise up on only the word of what at best may be a faux emperor. What's a world leader to do? In The Emperor's New Clothes the only egress is into the arms of love, and so Napoleon falls hard for Pumpkin (Hjejle), the wife of his recently deceased contact in Paris, and quickly utilizes some serious battlefield strategies to make her withering vegetable-market sales a major success. Love blossoms among the cabbages, so to speak, while back on St. Helena the pompous Eugene dictates his memoirs (er, Napoleon's memoirs, that is) and endlessly stuffs his face, much to the chagrin of his handlers. Taylor's film has a number of clever touches (on his way to Paris, Napoleon stops at Waterloo and is chagrined to find he can buy souvenirs of himself and his bloody route), but the film, despite a pair of excellent performances by Helm and some spot-on production design (by Andrea Crisanti of Cinema Pardiso) and cinematography (by Alessio Gelsini Torresi) fails to ignite in the way a film -- even a comedy -- revolving around Napoleon should. His romance with the peasant Pumpkin and his eventual acceptance of his fate is a touching “what if?” but it's hardly enough to have the scourge of the English (and so many others) making kissy-face while destiny beckons. All's fair in love and war, I know, but really now. 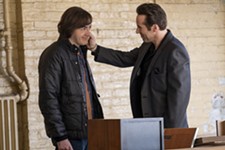 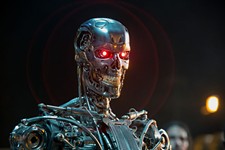 Terminator: Genisys
The Governator is back