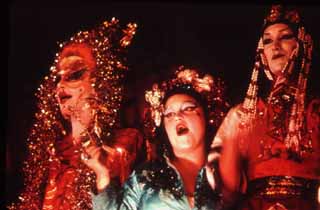 Maybe it's the old-timey, silent film title cards, or the vaudeville piano tinkering on the score, but The Cockettes produces a yearning wistfulness for another time and place -- specifically, 1970s San Francisco. Of course, that free love bacchanalia -- where every good story began with how many hits of acid were involved and “gender-bending” didn't refer to the latest Calvin Klein ad campaign -- would eventually give way to AIDS and overdoses, but David Weissman and Bill Weber's unabashedly nostalgic documentary evokes the time just before it all fell apart, and, damn, does it look grand. Using indispensable archival footage, photographs, and recordings, the film steeps itself in that milieu to recount the rise and fall of the Cockettes, an S.F. theatrical troupe made up of gay men, a sprinkling of straight women, one baby, many, many hits of acid, and a trunk full of chiffon. The troupe's motley beginnings were as the impromptu halftime entertainment at the Palace Theater's midnight shows. They hopped onstage in full drag and stripped to a Rolling Stones song; the audience loved it so much, the Cockettes started the song over and did it again. Soon the troupe went from sideshow to center stage, packing in the audience for their famously flamboyant (and mostly unrehearsed) revues, like “Tinsel Tarts in a Hot Coma” and “Gone With the Showboat to Oklahoma.” The Cockettes and their shows were united in a desire to explore the fluidity of sexuality -- and to do so using a lot of drugs. (One surviving member laughs and recalls that they were practically “brushing our teeth” with LSD.) Eventually, the group's enormous celebrity in North Beach (devotees included Janis Joplin, Rex Reed, and Truman Capote) led to an ever-so-slightly heightened professionalism, which caused the group to splinter; the remaining Cockettes had a show run briefly off-Broadway to disapproving New York audiences unamused by the group's love of anarchic, if somewhat amateurish, fun. Weissman and Weber use illuminating interviews with the surviving troupe members and others in the community, like filmmaker John Waters, to explore the Cockettes' commune beginnings and eventual collapse (self-professed queen Goldie Glitters is especially fun to watch sniffing about how they never should have let women into the gang). Inevitably, the film's coda catalogues the many deaths -- most lost to drug overdose or AIDS -- and the film turns especially poignant when ex-Cockette Anton Dunnigan, who passed away before the film's release, recalls those happier times: “Just give me a torn dress, a hit of acid, and let's hit the beach.” Cue the footage of Cockettes in spangles and glitter, high-kicking and belting out show tunes at the top of their lungs. Damn, it looks grand.