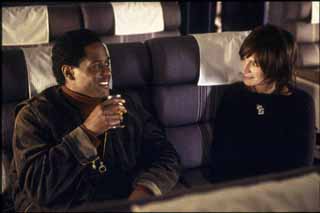 If you fuse the title's two cheeky associations -- brain matter and nudity -- I suppose logically one might come up with a mindfuck, but I think even that would be a gracious estimation of Steven Soderbergh's latest film. With Full Frontal, the Oscar-winning director is clearly trying to recall both the sexual/domestic provocations of his breakthrough debut, sex lies & videotape, and the gonzo experimentation of 1996's nicely oddball Schizopolis. The result is neither provocative enough nor oddball enough -- hell, not even interesting enough. Full Frontal is an arty, protracted tease. The elements for something good are all present -- a talented ensemble, a promising script by first-timer Coleman Hough, and a seemingly earnest desire to leave the bullshit at the door (Soderbergh issued a set of rules to his cast detailing the absence of set staples like craft services, hair and make-up, and attitude) -- but the director and his team of players never capitalize on the potential of the project. Nor does the strict asceticism add up to the film's approximately $2 million dollar budget -- a pretty hefty price tag for its fly-by-the-seat-of-its-pants aspirations. Full Frontal begins with the opening credits of a fictional film called Rendezvous starring movie stars Calvin (Underwood), playing an actor, and Francesca (Roberts), playing a journalist profiling the actor. The film frequently returns to this movie-within-the-movie; its scenes are distinct in that they're shot on 35mm (the "real" stuff is limited to grainy DV). The rest of the film is split between a stable of characters, all associated in some way with the fictional production: the screenwriter, Carl (Pierce), a sad sack in a limp marriage; his wife, studio exec Lee (Keener), who's having an affair with the "talent"; the producer, Gus (Duchovny), whose birthday party will bring together most of the principals at film's end; and so on. The disparate characters tend to bump into each other, blips on the same social radar. They're all part of a certain L.A., monied, movie sensibility that's terrifically tedious to any one not part of the club -- or to anyone who already caught its much funnier, much nastier lampooning in The Player. Individually, most of the actors do fine work; Pierce and Keener are by far the most compelling of the lot, and their story arc actually contains ... well, an arc. Roberts is bland to taste, both as the princess-y movie star and as the princess-y movie star mugging in a pretend movie. (Deep, huh? So many layers.) The movie-within-a-movie is the film's biggest miscalculation; running a close second is the choice of digital video. There's no rule that DV has to look like a cheap hidden camera, but that's what Soderbergh appears to be going for here (he manned the camera himself, under the name of Peter Andrews). One of DV's strong points is its innate intimacy, the ability to slide with ease right up into actors' nose hairs, if you please. Instead, Soderbergh often opts for faraway and out-of-focus, actors' faces blurred to the point of pudding. (I appreciate the filmmaker instructing me to question camera placement and language; I feel properly scolded, now gimme back my close-ups.) There's a smattering of wickedly funny bits; as a bad actor portraying Hitler in a bad play called The Sound and the Fuhrer, Nicky Katt steals the movie by checking his pager and muttering "Fucking Goebbels." Still, there's isn't enough humor -- or even enough weirdness -- to buoy the film. In the end, Full Frontal is an exercise in self-congratulation. If it wasn't directed by Steven Soderbergh, would we care as much? Would we forgive the whole-hearted but half-assed mess it is? Possibly, but that doesn't make it any more pleasurable to watch. Expectations aside, Full Frontal fails because it takes itself so seriously, and because it is itself so seriously dull. Soderbergh's straining to give us a wink -- come on, guys, this is fun -- but really it just feels like some awful eye twitch -- a spasm of yawning self-indulgence in a mostly captivating career.