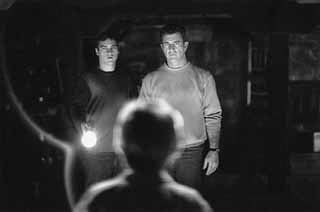 Shyamalan, the writer/director (and sometime actor) behind The Sixth Sense and Unbreakable, parcels out information like a triage medic doling out morphine; every tiny bit is carefully considered and then rationed out as though he were terrified he might exhaust his supply before the closing credits. His films are exquisitely controlled and refined pieces of work, and although Time magazine labeled him “The New Spielberg” in a recent cover story, his heavily stylized spook shows feel more Hitchcockian due to the precise mechanics of their storytelling. He doesn't so much lead audiences on as he does manipulate them with a style of subtle misdirection that would put cardsharp Ricky Jay to shame. There is a clear link to Spielberg, though, in Shyamalan's consistent return to the metaphysics of the mundane. At times his films border on New Age-y aphorisms: Love conquers all, even death, and faith, above all, is the sticky bonding agent of his universe. Signs is neither the director's best work nor his worst (although it seems extreme to call any of his films outright “bad” -- they all succeed to varying degrees but their success hinges almost entirely on the viewer's willing suspension of disbelief and the (un)ease with which Shyamalan sustains it). Its antecedents -- Rod Serling's The Twilight Zone, George Romero's Night of the Living Dead, and, surprise!, Steven Spielberg's Close Encounters of the Third Kind -- are obvious almost immediately, but Shyamalan's personal style, which falls somewhere between the hyper-surreal world of David Lynch and the bland normalcy of Leave It to Beaver is his all his own. In Shyamalan's world, every single character, object, and statement is swathed in a greater meaning: That cheeseball isn't just a cheeseball, pal. You might think all these subtle, writerly plot machinations would grow cloying after a while, but Shyamalan takes such care to link the mundane with the metaphysical (and more often than not you barely realize it until the final coda) that his obscurist puzzle-box nightmares end up feeling like pseudo-religious funhouse rides. He creates an M.C. Escher world filtered through the metaphysical lens of his native India. Which is to say, Signs, which involves crop circles, alien invasion, and Mel Gibson as a family man and former priest who lost his faith after he lost his wife, is both a film with deep and wide religious convictions behind it (although they're more universal than specific) and an outright chiller. Set almost entirely on a farm smack dab in the lush, rolling fields of central Pennsylvania, the film moves from mystery to paranoia to global catastrophe but never loses sight of the fractured family at the heart of the story. Gibson turns in a well-grounded performance as father-with-a-small-“f” Graham Hess, and Joaquin Phoenix, as his (much) younger brother, is admirably restrained from his usual paroxysms. In fact, everything about Signs is restrained, perhaps too much so. Which isn't to say there's anything boring about it; Shyamalan manufactures real, honest-to-goodness, nail-gnawing suspense like cows make methane. Find a way to power a grid with delicious unease and this guy could be the next Texaco. Still, the shadowy, barely glimpsed horrors and circular philosophizing of Signs could use a tad more of Romero's skeletal graveyard boogie. It's quiet out there. Too quiet.