Basque filmmaker Julio Medem's small but devoted international following should find more of the same to love in his latest feature, Sex and Lucía: more melodrama, more byzantine plotting, more tragic love, more swooning visuals (Medem uses DV for the first time here, to mostly gorgeous effect). Complexly but not unsatisfyingly charted, Sex and Lucía begins with a hurried phone call: Waitress Lucía (Vega) is trying to mend an early morning spat with her writer-boyfriend Lorenzo (Ulloa) during the middle of dinner rush. Unsuccessful, she races home to their apartment to find Lorenzo gone and what looks to be a suicide note. The phone rings -- the police, with bad news -- but before they can even tell her the details, Lucía's out the door, down the street, and halfway to an isolated Mediterranean island for a much-needed breakdown. From there, the film skips around, from Lucía and Lorenzo's charmed courtship and heady first couplings to their last fight, from a previous island tryst between Lorenzo and stranger Elena (Nimri) that made a baby to the birth of that child, unbeknownst to her father or his new girlfriend. Medem dips his quill into smaller stories as well -- the heated love triangle between a daughter, her porn-star mother, and the man they both love -- and while these asides border on irrelevancy, they add to an almost surfeit of narrative detail. That richness is a double-edged sword: Every character in the half-dozen-member or so ensemble could merit his or her own film, so layered and involving are they, but the film feels a mite overstuffed. And, at the risk of sounding like a square, Sex and Lucía could also stand a little less sex. No matter how titillating or artistically shot, movie sex is movie sex, and it gets old after the third consecutive scene of nothing but. The film suffers some too from a lack of clarity. The many stories within -- interweaving in intentionally contrived ways (you get the feeling the word “sensational” might be a favorite of Medem's) -- are often confusing; certain plot developments I didn't quite get until five minutes past, and I'm still puzzling over the conclusion, which reinforces Medem's fluid sense of time and his elementary belief in second chances (even if it requires a mystical nudge to get the ball rolling). Still, Medem's film is a bleached-out beauty, hitting our most commanding human emotions -- lust to love to grief to rage and back again -- while only occasionally striking a wrong chord. 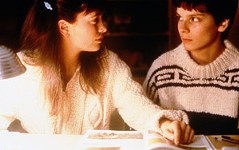 Lovers of the Arctic Circle
Using impressionistic and circular stragies, this Spanish film tells the story of two lovers from the time they meet at the age of 8 to the age of 25, when they may or may not meet again. 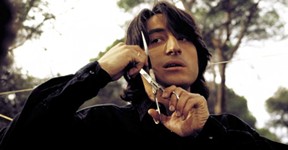