Dana Carvey is a good comic, a great mimic, and maybe even a “master of disguise.” But he's no filmmaker, as The Master of Disguise so painfully proves. The film is co-produced by Happy Madison, the production company of Carvey's old SNL pal Adam Sandler, and Revolution Studios, longtime producer Joe Roth's relatively new company, whose comedy output so far has tended toward efforts such as Tomcats, The New Guy, and The Animal. Carvey co-wrote the script with Harris Goldberg (Deuce Bigelow: Male Gigolo), although it was directed by first-timer Perry Andelin Blake, who was the production designer on Joe Dirt and almost all of Sandler's films up until now. All that back history is merely a lead-in to saying that The Master of Disguise is not even half as good as any of the movies mentioned above. Indulge me in this spoiler, which is also the movie's most audibly successful laugh-getter and a recurring gag throughout: Every time the villain (Spiner) laughs his hideously villainous laugh, he also lets fly an involuntary fart. Essentially, The Master of Disguise is a gimmick in search of a movie: how to get Carvey into as many silly costumes and deliver as many silly voices as possible, plot mechanics be damned. Apparently, Pistachio Disguisey (Carvey), is the son of retired “master of disguise” Frabbrizio (Brolin), who decided to raise his son without knowledge of his inherited trait of mimicry. Due to a special family gift called “energico” the Disguisey clan can turn themselves into any shape, size, or form -- a gift we see in action during the film's opening sequence as Fabbrizio runs from a caper in Palermo, Italy, disguised as a Bo Derek lookalike: Suddenly Bo Derek pulls off her mask and she morphs into James Brolin -- although the Bo-in-cornrows allusion seems rather far afield from the knowledge base the movie's intended PG crowd is likely to draw from. It's this kind of inattention to the craft of joke construction that plagues The Master of Disguise. You get the feeling that Carvey gave his all as a freewheeling cut-up throughout the filming, and that he and the novice director relied on the belief that gold could eventually be culled from Carvey's voluminous ouput. Well, it ain't so, and the five-minute-long outtake coda at the end of this long, 75-minute movie proves it. There are mountains of outtakes of Carvey in disguises that never once appear in the movie. Curiously, The Master of Disguise also resembles the original Spy Kids movie in terms of plot devices that have kids being forced into disguise/spy duty in order to rescue their kidnapped parents. Any kids desperate for a vicarious adventure in parent rescue are advised to wait until next weekend for Spy Kids 2. 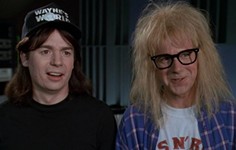 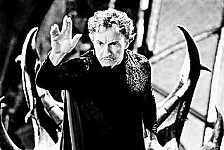 Little Nicky
With Little Nicky Adam Sandler can be seen to be stretching his comic deviltry as he strives for some more involved gags, costumes, and effects. ...