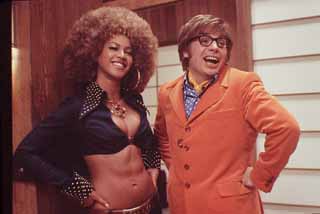 Like a patient too long under laughing gas, the latest installment in the Austin Powers series has stopped making much sense at all, but it sure gets its giggle on, and good. Series creator, writer, producer, and the titular man of mystery, Mike Myers, is back doing what he does best -- misbehaving -- and he still inspires enough bonhomie to mask the fact that his spy franchise is running out of steam. As has become de rigueur with the Powers films, the opening credits roll with another splashy, tongue-in-cheek production number (Myers apes everything from Singin' in the Rain to the goofy gangland balletics of “Beat It”). Dr. Evil (Myers) is back from his banishment in space, looking to once again make a go at world domination. He enlists the aid of a Dr. Goldmember, Myers' latest incarnation, a disco-dancing Dutch scientist who lost his peeper in an unfortunate smelting accident and now wields a goldenrod. (He also likes to peel off his dead skin and suck on it, but that's just gravy.) Goldmember wants to destroy the world -- why, exactly, is unclear, as he seems to be having a smashing good time running Studio 69, a discotheque in the Seventies. (And Myers clearly gets a kick out of mocking 69's obvious inspiration, Studio 54, and its flamboyant overlord Steve Rubell, who Myers ably portrayed in 54, his only dramatic role to date.) To put his evil plan into action, Goldmember time-travels to the present, with Powers' spy dad, Nigel Powers (Caine), nabbed as bait to lure in Austin, now in league with soul sister Foxxy Cleopatra (Knowles). None of this really matters (and a good half of it is completely incomprehensible); any plot development is just an occasion around which to construct skits for Myers. As ever, some of the freshest, funniest stuff are the musical numbers: In, hands down, the film's giddiest high, Dr. Evil and his wee clone Mini Me (Troyer) render a jailhouse version of “Hard Knock Life.” The humor here has downshifted into mostly potty jokes, which shouldn't really bother anyone still in touch with their inner prepubescent boy. (Pity the poor soul who isn't: You're missing some funny shit.) Tougher to reconcile, however, is the waste of talent. Not of Myers, of course; he's like some mad genius running on Ritalin and Sweet Tarts, rooting out the charm in every crass moment. But Caine, no slouch in the swinging spy business himself, does little more than sport a bad rug and flash an even worse rack of mealy dentures. Same with Knowles, only she sports a sweet afro and flashes a mightily impressive rack of her own. In her screen debut, the Destiny's Child singer's major contribution here is the occasional "sha-zaaaam!" but there's enough sass there to sense that there's an actress in her itching to get out. Considering Knowles is probably the most shagadelic yet of Austin's femme-kicks, it rubs rather wrongly that there's zero sexual tension between the two: They share but one chaste kiss. The cynic in me smells a rat -- or rather, a market-driven fear that an interracial romance wouldn't play in Middle America. But there's no room for cynicism in Austin's hippy-dippy world of free love and fast cars, so let's just say Foxxy's too much lady for one foppish spy to handle and leave it at that.