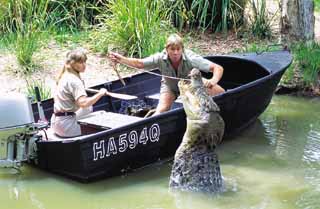 If you watch cable television, you know that Aussie outdoorsman Steve Irwin is one of two things: He's either incredibly brave, or certifiably insane. Looking like an overgrown Boy Scout, Irwin dangles poisonous snakes, scuffles with crocodiles, and courts the possibility of a painful and agonizing death in a multitude of other ways, all for the sake of our entertainment. In many ways, he's this generation's Evel Knievel. The Crocodile Hunter: Collision Course is nothing more than an extended version of the syndicated television program, with the unkempt Irwin spending most of the movie excitedly shouting at the camera as he taunts something venomous. (This man does not seem to have either a normal speaking voice or a speck of vanity.) The film is structured around a silly story about a satellite camera falling from the sky and landing in northern Queensland, with some third-rate Jaws and Raiders of the Lost Ark shenanigans thrown in for good measure. But the center of attention here is, of course, the sadist/masochist Irwin, who seemingly enjoys making you squirm as he lives out an endless string of death wishes. (Question: Just how many deadly creatures can exist on a single continent?) Of course, you can see Irwin's goofy but dangerous shtick every night on Animal Planet -- why would anyone go to a movie theatre and pay money to see it? The Crocodile Hunter: Collision Course looks as if it were financed with a couple of maxed-out credit cards, and most of the actors vaguely wander about the movie as if they haven't a clue of why they're there. Only Szubanski, who played the farmer's cartoonish wife in Babe, appears to make an effort here, albeit a shamelessly hammy one. As the crotchety rancher who battles the equally crotchety croc that has swallowed the satellite camera, Szubanski plays the character like a Down Under Mammy Yokum, saying every line out of the corner of her mouth. She's so ferocious and mean that you half-expect Irwin to wrestle her to the ground at some point in the movie. Crikey!