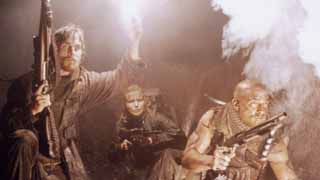 It's enough to make you wish Professor Quartermass was still lurking about: In present-day London, a team of miners working on a new Underground tunnel inadvertently frees a dragon dormant since the days of St. George. In short order, the gargantuan beastie manages to reproduce, filling the skies above the earth with millions of fire-breathing, ash-eating, intelligent reptiles. Twenty years later, humanity is reduced to a few bedraggled outposts shacked up in fire-retardant stone castles, growing secret gardens in the shadow of the behemoth's spiked tail. The dragons, huffing and puffing and blowing down pretty much everything with their colossal wingspans, armor-plated hide, and ravenous appetite for all things sooty, are the new lords of the earth. It was they that killed the dinosaurs, we discover, and, unsurprisingly, this whole global warming thing may not have been entirely our fault after all. Reign of Fire's premise is a great one, matching our ongoing love affair with dragons to an apocalyptic vision straight out of recent headlines. Director Bowman, who helmed the underrated X-Files feature a few years back, has an eye for doom; his dragons (mostly rendered in CGI) are like huge, aerodynamic missiles -- their long, barbed tails whip around behind them like deadly, slewing rudders, and their pockmarked and dirty wings recall Terry Gilliam's toothy Jabberwock. These noisome, foul monsters who secrete “organic napalm” from glands in their massive maws provide a crash course in Dragons 101. Not so, unfortunately, for the heroic humans who must do battle with them. Former American Psycho Bale, as Leader of Men Quinn (it was his mum who freed dragon zero back in London), lords it over a Northumberland castle and its starving inhabitants until American ex-Marine Van Zan (McConaughey) shows up to teach him a thing or two about dragon-slaying. Reign of Fire is one of those genre films that wears its inspiration on its sleeve, and the film it most resembles is George Miller's Mad Max 2: The Road Warrior (which itself is drawn from various Westerns). Bale, desperate to protect his people and bring in another year's crappy crop of withering foodstuffs, is a clear descendant of Michael Preston's Pappagallo character, and McConaughey is Max redux (although with his perpetual hollering and stogie-chomping bluster, his performance also echoes Robert Duvall's Col. Kilgore in Apocalypse Now -- there are no big waves in Northern England but Van Zan does have his men go sky-surfing alongside their fiery foe). Adrian Biddle's cinematography is dark, darker, darkest, as befits a film wrapped in so many layers of grime and ash that you feel a need for a good scrubdown after viewing, but Reign of Fire's weakest link lies with its human actors, who constantly shout and growl at each other in ways far more unnerving than the (often poorly rendered) CGI dragons. I kept hoping one of the monsters would turn out to be Sean Connery and wing 'round for a spot of tea and a interspecies chat, but no such luck. (For that matter even a lone Highlander would have come as a welcome surprise, but no, we get Texan McConaughey, devouring far more scenery than any of the ravenous, airborne Geckos From Hell.) A brilliant idea that somehow misses the mark by a North country mile, Reign of Fire will make monster fans ache for what might have been. Now all we can do is wait for the arrival of Lord Smaug; Peter Jackson, it's all up to you now. 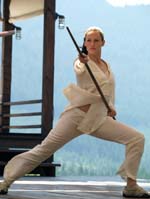