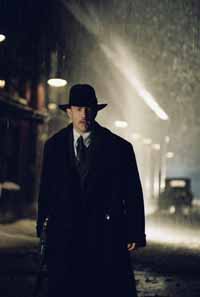 That gunshot to the head in the last moments of Sam Mendes' American Beauty was something of a portent; his follow-up, The Road to Perdition, is a death binge, with a new bullet to the brain clocking in every five minutes or so. But how else could it be in a revenge saga set in Capone's Chicago, circa 1931? The mafia is never explicitly mentioned here, but introduce a couple of Tommy guns and an avuncular Irish overlord like John Rooney (Paul Newman), and it's clear these men are married to the mob. Newcomer Tyler Hoechlin plays 12-year-old Mike Sullivan Jr., the son of a heavy named Michael Sullivan Sr. (Hanks), right-hand man and adopted son of the powerful Mr. Rooney. Gruff little Mike feels the brunt of his father's emotional inaccessibility -- Mom (Leigh) and little brother (Aiken) seem to get all the affection, with none left over for Mike -- and he's at an age when a son's blind idolatry is fading into suspicion over what Pa really does for a living. To that end, Mike stows away in the car that carries his father and Connor Rooney (Craig), grown son of John, on one of their errands. From a crack in a window, Mike witnesses a warehouse killing that both inducts him into his father's world and sets the plot in motion. Sullivan runs afoul of the Rooneys and hits the ground running, with little Mike in tow. Superficially, they're on their way to Aunt Sara's beach house in Perdition, Ill. -- a safehouse at which to stow Mike while Pa takes care of business. But it's the other Perdition -- eternal damnation -- Mendes is concerned with. His film is about fathers and sons, and the legacies fathers leave to their sons; Sullivan's already got "Hell" stamped all over his traveling papers, but the jury's still out on whether Mike will follow in his father's footsteps. That puts young Hoechlin in a sink-or-swim situation. With his sharp cheekbones and brooding eyes, he recalls Wes Bentley (who shot to fame in Mendes' debut feature), but he lacks both the intensity and the instinct to carry the film; he just sort of dog-paddles along until finally becoming lost to the tidal wave of Tom Hanks. Hanks gives an enormously understated performance, short on words but large on physical presence. That extra heft seems to have weighed down his patented elasticity, even lowered the pitch of his voice, to create a portrait of a quiet, stoic man undone by betrayal. The rest of the supporting cast is roundly superb, especially Jude Law, almost completely unrecognizable and two shades shy of hammy as a creepy hitman with a flair for photographing the dead. Mendes, too, has certainly proven that the assuredness of American Beauty wasn't beginner's luck. But, in trying to distinguish himself from that picture, he's perhaps gone too far over the fence. Where American Beauty was color and bombast, Perdition is wan; the film feels alternately cloaked in heavy wood paneling or soaked in cold Chi-town slush. American Beauty may have intoned, "There's so much beauty in the world," but Perdition seems hell-bent on confirming the opposite. It's a dirty, ugly, joyless world these fathers and sons live in, and for all the passion involved, of retribution and a father's fierce love, Perdition is as emotionally distant as Sullivan. The feelings are all there, just submerged; it means the audience must plumb a little deeper. Yet, after two hours of the relentlessly downer Perdition, I didn't want to plumb anymore. I wanted a little fresh air, a little beauty in the world.