Thirteen Conversations About One Thing

This new movie by Jill Sprecher (co-written with her sister Karen, as was their previous film Clockwatchers) is more to be admired than enjoyed. As its title intimates, this is a movie that converges toward meaning from a baker's dozen of directions rather than laying out its course in one direct line or trajectory. The one thing the movie is concerned with is happiness – the one thing that everyone seems to want but so few really attain, and even then it seems to be grasped for only a fleeting moment in time. Like some modern-day Buddha, the Sprechers seem to be on a search for the source of human happiness, and toward this mission they developed this movie that provides several vignettes that explore their theme. Thirteen Conversations follows several different characters in seemingly unrelated episodes, but like many recent films from Pulp Fiction to Sliding Doors/i>, Thirteen Conversations shows us series of unrelated random characters and events that eventually overlap or merge their storylines in ways unforeseen at the beginning. There are four groups: the Lawyers, the Academics, the Housekeepers, and the Claims Adjusters. McConaughey takes the lead in the Lawyers segment as an ADA on the night he celebrates one of his grandest courtroom victories is also involved in a hit-and-run that replaces his joy with guilty agony. John Turturro stars in the Academics section as a university physics professor who replaces his joyless marriage (to Amy Irving) with the appearance of happiness in a perfunctory affair (with Barbara Sukowa). The always-fabulous Clea DuVall is featured in the Housekeepers storyline as a cleaning woman who believes in miracles until her life and well-being are turned upside down by a random violent act. And Alan Arkin practically steals the show as a middle-management insurance guy in the Claims Adjusters portion. He's the cynic who distrusts happiness and unleashes a random act of cruelty just for the hell of it. All these storylines are told in snippets that only begin to congeal into one entity toward the end. Still, the whole thing is kind of spotty, as if it were a bunch of vague outlines for a future movie. And, for a movie about happiness, Thirteen Conversations is terribly joyless. The film tries hard and its ambitions are provocative, but its conversations often fall like that Zen tree in the forest.

Thin Ice
Greg Kinnear plays a larcenous insurance agent who steps into a caper that spirals out of control. 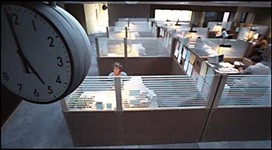