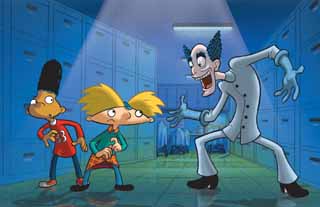 Playing like some strange, post-Battle of Seattle take on semi-real-world kid politics filtered through the lens of Naomi Klein's No Logo movement and some seriously Seventies-era “stick it to the man” polemics, this big-screen adaptation of the Nickelodeon network's animated children's show is a strange beast indeed. Admittedly, I hadn't watched the Nick show previously (between the Cartoon Network's glorious Adult Swim lineup and the Simpsons/South Park/Powerpuff Girls barrage there's no longer any time), but if it's half as left-leaning and politically aware as Tuck Tucker's feature -- which feels straight out of early Children's Television Workshop casting -- I suppose I ought to at least give the show a chance. Arnold (Klein) is a chirpy, good-natured city kid, whose chief identifying feature is that he has a head shaped like a football. Along with pint-sized nemesis Helga (Smith) -- who frequently makes light of Arnold's odd-shaped cranium while secretly harboring a crush roughly the size of Charlie Brown's head -- and best friend Gerald (Smith), with his Kid 'n' Play mega-fade, Arnold sets out to upset the plans of nefarious urban developer Scheck (Sorvino), the sort of Snidely Whiplash corporate villain who thinks turning the kid's Brooklyn-esque neighborhood into one huge pile of gentrified sprawl is a good idea. Arnold and the gang attempt various nonviolent means to this end, throwing a Blockapalooza block party and so forth, while Arnold's grandparents -- clearly no strangers to direct action themselves -- take somewhat less peaceful routes to achieve the same goal (Grandma ends up in jail while Grandpa laces the street with cartoon incendiaries). Despite Hey Arnold!'s unique politics -- only John Kricfalusi's grand social experiment Ren & Stimpy had anything even remotely approaching this sort of straight-on anarchic attitude, this is pretty tame stuff. The gags are generally aimed squarely at the 10-year-old target audience, and Arnold, a do-gooder through and through, is apt to squeakily opine on the joys of optimism and community service. (Ren would have eaten this kid and hairballed him out in 30 seconds flat.) The animation is strictly uninspired, primary color-wheel basics, and for all its seeming radicalism, the overall message is about as radical as an episode of Chico and the Man. (The characters of Hey Arnold!: The Movie appear to exist in one of those Seventies-era urban neighborhoods that comes already populated with a cross-cultural mix of Asians, African-Americans, Jews, and Hispanics where everybody gets along and from which Spike Lee's Mookie would have fled in terror.) Inoffensive and sporadically funny, its chief charm is Arnold's ridiculous noggin, and that's not saying much.