Initially, Cherish takes its cue from the AM light pop central to its plot -- frothy and fun. Tunney is Zoe Adler, a San Francisco computer programmer and social retard with a head full of frizzy hair and a mind stocked with similarly frizzy ideas. She's scared to be alone, so she hits the dance floor most nights and goes home with whomever. (When her therapist asks her why she goes out with so many different men, Zoe, tripping on her retainer, responds, “I don't think I'd go out with so many if any one would call me back.”) After a night of boozy prowling, Zoe is forced at gunpoint by a stalker to get into her car and drive, only to plow into a bicycle cop. Nobody believes her story that the gunman made her do it (he flees before the cops arrive), so she's placed under temporary house arrest until trial, part of the electronic bracelet program. The meat of the story takes place here, in the confines of Zoe's rundown warehouse studio, where she devotes most of her time to slow dancing to the wall-to-wall jams from KXCH “Cherish” (the Turtles, Human League, Soft Cell, Modern English), trying to seduce the delivery boy, and devising a plan to outwit her new ankle bracelet. County deputy Bill Daly (Nelson) is assigned to her case, frequently coming by to check on the status of the bracelet and, of course, to meekly fall in love with Zoe (pasty-faced and dry-mouthed, he's just as socially inept as she). Some of the finer moments of the film come from their tentative courtship; in one endearing scene, the two simply sit on a couch silently, legs lightly pressed together, and you can almost hear them panting. Tunney, a standout actress usually stuck in substandard films (Zero Limit, The Craft), is great, and never is she more charming than when she's roller-skating circles around a hapless and falling-hard-fast Blake Nelson. Too bad her character doesn't make a lick of sense: Zoe may very well be the first acutely socially maladjusted soul to actually benefit from hermitic isolation. Additionally, she becomes more kind-hearted, fashionable, confident, at ease with conversation, and in possession of luscious straight locks (all that leftover time to iron one's hair flat, I suppose). The film soon loses the surreal, poppy bent of the beginning and devolves into something of an inspirational story (“social misfit makes good!”) and then, even more bizarrely, into a thriller: That stalker business from the earlier scenes is picked up again -- after two years of house arrest, Zoe realizes two days from trial that her only hope is to find the proverbial one-armed man -- but Zoe as Nancy Drew in hip threads is far less interesting than Zoe as dysfunctional slob swaying to the sweet sounds of Hall & Oates. Clearly, writer/director Finn Taylor (Dream With the Fishes) is trying to say something about the nature of stalking -- one man's cute crush is another man's freaky obsession -- but it comes out muddled and inconsistent, much like the rest of Cherish. The soundtrack is a boisterous blast from the past, and there's a quiet pleasure to watching Zoe and Daly let their composure loose like scrambled eggs, but there's little else to hold dear here. 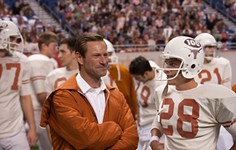 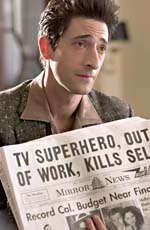 Hollywoodland
Although Hollywoodland stokes the dying embers of uncertainty regarding the 1959 death of George Reeves, TV's Superman, it nevertheless seems that the result should be more provocative and scandalous.