The Lady and the Duke

Of particular interest to Rohmer fans only, this stylistic experiment by the 82-year-old director of Claire's Knee and Chloe in the Afternoon is gorgeous to behold but trundles along at roughly the speed of a grounded manatee. It's slower than syrup in Siberia and filled with the sort of historical facts that force you to glue your eyes to the subtitles for fear of missing a key name, date, or place. Ecouté et répeteé because there will likely be a test later. What makes The Lady and the Duke a still-worthwhile experience is the director's striking use of painted backgrounds instead of real locales. Rohmer commissioned a series of oil paintings from French artist Jean-Baptiste Marot to serve in place of traditional sets, and the result is strangely captivating, as though you were watching the old masters come to life. Here's a flock of crows pinwheeling against a too-blue and brushstroked sky; there's Russell, as English noble Grace Elliot walking through a painted, post-Bastille Paris, the fine-lined brushwork plainly evident. Surreal doesn't even begin to describe this look which is at once wholly false and completely beautiful; it's cinematic expressionism taken to a hyperreal level, and for that reason alone Rohmer's film ought to be savored on the big screen and not confined to DVD or VHS obscurity. Still, the film's audience will likely be limited by the amount of head-scratching viewers sans a degree in French history will find themselves engaged in. Based on the real-life journals of Mme. Elliot, the plot -- which takes place one year after the fall of the Bastille, while the revolution still coats the Parisian streets with blood and the grisly sight of a noble's head being marched through the streets atop a pike -- revolves around Elliot's dalliances with her ex-lover, the Duke of Orleans (Dreyfus). He's first cousin to King Louis XVI, although he's eager to side with the commoners -- Elliot calls him a revolutionary, and he is, to a point -- instead of his noble bloodline. The pair trade barbs and philosophical discussions like other ex-couples trade tales of new romances, and while he goes about trying to make good on his promises to help the little man, Elliot is blue-blood through and through. Ensconced in her country house, she goes to terrific lengths to help the doomed noblemen around her, at one point going so far as to hide a wounded man in her bed while the police toss her house. It can't go on forever, this run of luck, and it doesn't -- in between, though, we're stuck with reams of revolutionary and anti-revolutionary fervor from both sides and everyone in between. Russell makes for a scrappy protagonist, to the manor born (and one who will likely die there as well), while Jean-Luc Dreyfus -- of Delicatessen and The City of Lost Children -- has a field day with the portly, vaguely porcine Duke. Rohmer's experiment is a bold move for a man of his age (Akira Kurosawa was another director making waves this late in his game and come to think of it, Rohmer's conceit is similar to one of Kurosawa's in 1990's Dreams, which had Martin Scorsese as Van Gogh within his own painting). Ultimately, however, The Lady and the Duke is just that, a bold (and lovely) experiment that will almost certainly bore most audiences into their own brightly colored dreams. 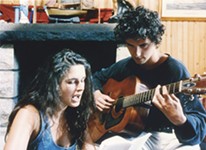