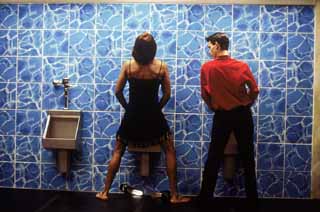 Point to ponder next time you spot a couple of homeless dudes behind a Minit Mart dumpster express-laning it to oblivion with a jug of cheap sangria: Is there anything more inherently pointless about their lives than those of people who grind out mind-numbing formula films like Juwanna Mann? If anything, I give the existential edge to the winos. Their addiction gets them off the hook, moral culpability-wise and, say what you will about binge drinking, the euphoria at least supplies a clear rationale for the behavior. I realize, of course, that there are piles of cash to be made servicing Hollywood's insatiable thirst for old wine in older bottles. But Lord! How empty must it feel to whiz away a year of your irreplaceable youth on a comedy that slavishly embraces the rankest genre clichés -- and to know its primary audiences will be people who are either incapable of recognizing your hackdom, or whose expectations are so chronically low that they won't care anyway? I know -- way too much moral unction over a numbskull summer comedy. But as both an enthusiastic consumer of well-executed mind candy -- I saw Galaxy Quest twice and even enjoyed Wet Hot American Summer -- and a serious basketball fan, I can't let this one slide. In hoop parlance, Vaughan commits a double foul here, botching two comedic traditions (sports and gender-role reversal) at once. In an early scene we see pro baller Jamal (Nuñez, who played Little Richard in Why Do Fools Fall in Love?), an assholesque amalgam of Isaiah Rider and Stephon “Starbury” Marbury, getting kicked out of the league for flashing his bare bum to hostile fans. With his life and career on the skids he tries the desperation ploy of dressing in drag and trying out for a women's pro league in the guise of honey-voiced shooting guard Juwanna Mann. Jamal, an unreconstructed sexist twat with no respect for the women's game slowly comes to … do I really need to finish this summary? Not if you've seen Tootsie, which laid down for all time the template whereby the callow male lout is morally improved through platonic contact with women. (But not, of course, before many cheap yuks are harvested from situations involving locker-room nudity, congratulatory butt-patting, etc.) Ironically, some of the few laughs I got from this trash-time snoozer came from one of the most predictable situations of all, in which a clueless rapper named Puff Smokey Smoke (Davidson) falls in lust with the appalled Juwanna. Given the cartoonishness of the bling-bling school of hip-hop, it's hard to imagine how one could push the boundaries of ludicrousness any further, but Davidson somehow manages the feat. Nuñez, set up to fail by Bradley Allenstein's brain-dead script, does exactly that in the lead role, though he at least is visually credible as a roundball drag queen. In terms of praiseworthy content, that's about it for a by-the-numbers movie that's neither crazy enough to succeed as farce nor emotionally affecting enough to honorably uphold the Tootsie tradition. This is one that, like a 1am rerun of a late-season Cavs-Grizzlies matchup, deserves to play out in darkness and obscurity.