Vastly superior to Spielberg's last sci-fi outing, the woefully pedantic A.I., this adaptation of Philip K. Dick's novella is closer in spirit to both Dick's own Blade Runner and Fifties film noir. In the year 2054, crime has been virtually eliminated in the city of Washington, D.C., thanks to the Pre-Crime unit, which uses a trio of “pre-cogs” to predict who among the city's citizenry will commit a crime and then arrests them before the criminal act takes place. The question that dangles at the center of the film -- is this system truly infallible? -- seems moot at best until the head of the program, black-suited John Anderton (Cruise), is himself slated for arrest when his face appears in one of the pre-cogs disjointed visions. On the run from his own men and desperate to prove that he's never had a murderous thought in his life, Anderton takes to the streets in an extended chase sequence that's one of the best things in Spielberg's film. Hiding among the very criminal element he's been sworn to eliminate, Anderton's race to clear his name seemingly hinges not on current events but on the abduction of his son six years before. At two and a half hours long, Minority Report suffers from some of the same third-act entropy that waylaid the director's far more ambitious A.I.; the film's obvious climax is supplanted by a whole new offshoot that encompasses the film's final 25 minutes, but even that can't erase the fact that Minority Report contains some of Spielberg's most breathtaking visions. Shot by longtime Spielberg cinematographer Janusz Kaminski (Schindler's List, Saving Private Ryan), who uses a bleach-bypass process and special, high-grain film-stock that leaves the resulting images looking chilly and bluish and the characters as though they'd just risen from a morgue slab, Minority Report takes the old frame-job device and gives it a sci-fi tweak, to excellent effect. Much of the film's success lies with production designer Alex McDowell (Fight Club), who has crafted a futuristic world that hangs together remarkably well, whether in the sterile, gleaming Pre-Crime headquarters, with its glassine computers and holographic images, or the buzzing, auto-piloted cars and police cruisers that zip up and down and all around the sides of the District of Columbia's sprawling cityscape. It's not all Blade Runner drip and drizzle, though; Anderton's country home and the equally vegetative manse of the Pre-Cog's creator (Smith) are models of realism (not counting the killer vines in Smith's garden). As the fed assigned to track the wayward Anderton, American Outlaw's Colin Farrell offers up the film's most personal bite; he's clearly unafraid to crack a smile now and again, which acts as a counterpoint to the icy, Northern European humorlessness of Pre-Crime Director Burgess (von Sydow -- what else would you expect from a man who's matched wits with Death over a seaside game of chess, though?). John Williams, another of the director's stalwarts, turns in one of his best scores, completely devoid of the soaring, string-laden treacle that mars so much of his later work (and Spielberg's), adding to Minority Report's uneasy gait instead of overwhelming it. It's not the crowning achievement in Steven Spielberg's oeuvre, but Minority Report stands on its own sturdy sci-fi legs, and there's no sign of that little imp Haley Joel Osment, to boot, thankfully. 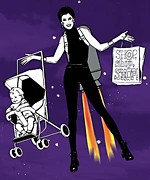 We Were Promised Jet Packs (and a Whole Lot More)
When will technology catch up to the movies?