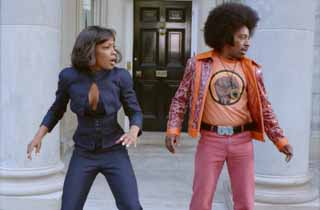 How do you parody a genre that as often as not is so over the top as to effectively be a parody of itself already? Lee (cousin to Spike) tackles the blaxploitation films of the Seventies with enough good-humored gusto to pull this one off somehow, thanks in large part to Eddie Griffin's irresistibly cool panache and an above-average script (by John Ridley and Michael McCullers) that takes color-blind potshots at everything black, white, and all shades of gray without ever devolving into the kind of infantile scatological humor that's marred so many comedies of this stripe since the Zucker-Abrahams team behind the Airplane! series finally hung up their wings. (Surely this means Eddie Murphy had no hand in the production as well; his idea of thigh-slapping guffaws more and more arrives in the form of fart jokes and the like.) Griffin plays the titular Undercover Brother, a snakeskin-and-platform-shoe wearing super soul brother whose sheer audacious charm would give Don King a run for his money. Despite an afro roughly the size and shape of Congo, it's clear from the start that we're meant to laugh with this undercover brother as much as at him. Lee's opening sequence, mirroring the Seventies freeze-frame, split-screen openings of countless blaxploitation flicks (several now rescued from obscurity by Austin near-homeboy Quentin Tarantino), has UCB driving in high style through the 'hood in his -- what else? -- big pimpin' Caddy. Avoiding an accident, he pilots the mammoth Detroit steel through an automotive pirouette that sends him into an ever-increasing series of 360-degree turns, all the while calmly holding the wheel with one cool, cool hand and the other clutching a frosty super-sized orange Big Gulp. What would have been a throwaway gag in any other film is here raised to high art, and it sets the film's tone perfectly. While surreptitiously deleting mortgage records from a local bank one day (to aid beleaguered low-income home owners, no less), Undercover Brother runs afoul of the B.R.O.T.H.E.R.H.O.O.O.D., a secret-society of good guys bent on sticking to the Man (who, in a nice James Bondian touch, always appears in shadow from his island fortress, issuing decrees meant to set the cause of the black race back a century or two) and led by McBride's blustering Chief. Our hero soon falls in with the group, hooking up with the likes of Smart Brother (Williams), Conspiracy Brother (Chappelle), and the tough-as-she-is-gorgeous Sistah Girl (Ellis). Doogie Howser's Harris is also on board as the B.R.O.T.H.E.R.H.O.O.D.'s affirmative-action hiree Lance, the whitest of the white boys. Together they go after the Man, who, along with simpering toady Mr. Feather (Kattan, playing it as broadly as possible), has slipped mind-control drugs to black presidential nominee, the General (Williams), in order befoul his Colin Powell-like image. Yes, it is tremendously silly, and no, it doesn't always hit its mark, but Undercover Brother is so game to try, and obviously reveres its source material so much that you can't help but fall in with the film's funky, funny mojo. Subtle gags litter the film, like the portrait of Danny Glover that hangs over the Chief's desk, or the constant (and consistently kickass) barrage of retro-hip pimpadelic outfits the UCB seems to change into every five minutes or so. Lee's film isn't afraid to skewer both white and black stereotypes, either, and does so with a childlike glee that you can't help but love. It's far from perfect -- as many jokes fall flat as succeed -- but like Undercover Brother himself, it's smarter than most, and twice as solid.