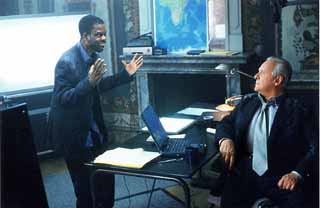 Deprived of nuclear thrillers since 9/11 when Hollywood executives unilaterally back-burnered several about-to-be-released movies that revolved around “touchy” subject matter, the American moviegoing public finally has the opportunity to add their two cents (or, more accurately, their admission dollars) to the matter. Bumped from its initial September release plan, Bad Company now has another misfortune of timing to grapple with as it follows last weekend's The Sum of All Fears release, the Tom Clancy nuclear thriller that surpassed box-office expectations and also managed to knock Star Wars II from the No. 1 spot. Now that the question of whether the American mindset is ready to accept movies that raise the possibility of nuclear holocaust has become moot, the box-office analysis should now focus on whether moviegoers can discern the difference between good and not-so-good nuclear thrillers. It would be far too easy to draw the parallel of Bad Company = bad movie, but the film is really not so much bad as bland. The story borrows a standard-issue “twin brother whom you never knew you had” plot device as its means of roping Jake Hayes (Rock), a low-level street hustler of chess games and premium ticket sales, into going undercover for the CIA as a stand-in for his killed-in-the-line-of-duty brother Kevin Pope. Pope had been the partner of Gaylord Oakes (Hopkins), who takes Jake under his wing upon orders from above, although he doubts that Jake will be able to pull off the illusion of passing as his “undercover brother.” Rock plays things surprisingly subdued and straight, and Hopkins' veteran agent is properly world-weary and no-nonsense. Bad Company is no Rush Hour buddy movie in which the emphasis is on the laughs and the different personalities of the mismatched protagonists. However, once the movie's early scenes of Jake's hurried indoctrination into the world of his brother and the CIA (an acronym that the old Jake defines as “Crackers in my Ass”) are over, the movie becomes a series of interchangeable scenes of meetings, exchanges, captures, gunplay, chases, explosions, and whatnot. The details always remain a tad fuzzy and the scenes fail to heighten the film's tension level and viewer interest. Director Joel Schumacher brings little to the table, although the movie adds an interesting footnote to his unusual film career, which has taken him from the excessively stylized heights of projects like St. Elmo's Fire and Batman Forever to thrillers about the white man's burden in A Time to Kill and Falling Down to the small character studies of his recent career, Flawless and Tigerland. Most to the point, Bad Company comes across mostly as a Jerry Bruckheimer film, having more in common with Bruckheimer films like Bad Boys, The Rock, Enemy of the State, Armegeddon, and Pearl Harbor: big missions, big buddies, big music, and big blasts. Bad Company, however, lacks the bite that can equal the Bruckheimer bark.