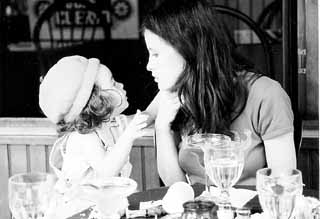 Square peg, round hole. That's what the twentysomethings who drift through Margarita Happy Hour are like. It's obvious they fit once, into a certain lifestyle, a scene, a demographic -- a sort of angry Brooklyn-boho existence of punk rock and performance art. But as they age (“twentysomething” is now pushing 30), they get further from who they once were. The women who frequent the local Mexican taqueria for its dirt-cheap drinks still desperately want to be those underground scenemakers, but the toddlers under the tablecloth, tugging at skirts and munching on free chips, have put a damper on their night life. One among them, Zelda (Hutchins), was an artist, maybe still is, but in the meantime pays for Little Z's diapers by illustrating chesty ladies for a porno mag called Screw. Zelda's boyfriend (and Little Z's dad), Max (Fessenden, director of indie films Habit and Wendingo), perhaps had a writer in him once, but that's long been supplanted by the idea of a writer -- a boozer, a brawler, a wannabe Beat poet with bad credit and a hands-off approach to mother and child. They're all reluctantly transitioning, and therein lies the dramatic tension in this first-time effort from writer/director Ilya Chaiken, whose own experience as a single mom inspired the piece. Honestly, it isn't much tension to go on, but that's really rather the point: the unbearable stasis of these lives. Still, Hutchins puts a good face on inertia (a sharp, dour face, too, that looks startlingly like a crossbreeding of Amanda Peet and Courteney Cox). Her Zelda is unapproachable at first; an acerbic tongue, gap teeth, and growly voice, she doesn't immediately appear to be anyone's leading candidate for mom of the year. But then the camera takes in her trapped existence -- after a day spent trying to secure Medicaid for her child, Zelda comes home to the packed loft she shares with eight others to find an all-night kegger under way -- and it's clear why she postures hard-as-nails: because she's perilously close to cracking. Margarita Happy Hour compensates for its motionlessness with its sympathetic and uncommon portrait of a certain kind of motherhood. Chaiken doesn't glorify Zelda as a modern-day hero, nor does she make a monster out her. (Conservatives will no doubt bristle at this picture of a twentysomething pushing 30 that, for all the love she has for her child, still wishes she could put on her fuck-me boots and go dancing.) That's both the beauty and the rub of the piece: this futile straining to reconcile a square peg with a round hole.