Unfortunately for the talented Laurence Fishburne, he keeps bad acting company in Damian Harris' overly sinister and under-plotted espionage thriller Bad Company. The story has one or two throat-catching twists, but the ending is a sham, an unsatisfying resolution that warns about what can happen to those who keep dangerous company. Fishburne plays Nelson Crowe, an ex-CIA operative recently hired by Vic Grimes (Langella) to become one of the elite members of “The Tool Shed,” Grimes' collection of ex-intelligence agents whose specialty is high-power espionage for Fortune 500 clients. Crowe is paired with Grimes' right-hand operative, Margaret Wells (Barkin). Barkin's talents seem more suited to comedy; her omnipresent sneer caricatures her character and weakens her “bad girl” image. For Nelson and Margaret's first joint assignment they photograph a businessman in a compromising position with his 16-year-old niece in order to oust him from the company's board of trustees, run by his sister. This happens in the first 15 minutes of the film, and the stakes only get higher and the situations only grow sleazier. Nelson and Margaret become lovers, and soon they are planning Vic's death in order to inherit the powerful “special operations boutique” headed by Grimes and coveted by the CIA. As often happens in the world of espionage, questions of loyalty arise. Can Nelson be trusted or is he still linked to the CIA from which he was dishonorably discharged? Where do Margaret's allegiances lie, and does she even have any beyond herself? Perhaps you'll ask yourself these questions as you ponder Bad Company, but chances are you'll be more interested in the total costuming budget for the film. Harris brings all of the slickness and fashion-consciousness to this film that he invested in his last feature Deceived. While Barkin can out-bitch Goldie Hawn any day, the gloss and hard-edged glamour of the film make Bad Company more of a promotional shoot for couture fashion designers than a taut, complex thriller. 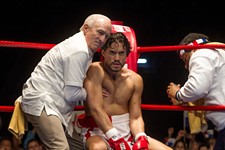