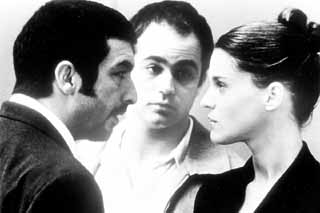 Grifters Juan (Pauls) and Marcos (Darín) cross paths in a Buenos Aires convenience store when Juan gets caught conning the clerk for change at the register. Marcos – who’s been busy stuffing candy bars and cigarettes down his pants – steps in, masquerading as a plainclothes cop, apprehending the baby-faced and apparently inexpert Juan, and offering to make him a partner for a day. This meet-cute sets in motion an inventive and lively caper film, as low-key in its technical execution as a sidewalk shell game but fueled by a frisky energy and a blithely circuitous storyline. A reptilian charmer with natty sideburns and an "office" in a tacky diner, Marcos can’t even pass a newsstand without stealing the morning edition. By day’s end, Juan and Marcos will graduate from purse-snatchings and "short" cons to a "one-in-a-million" scam, selling counterfeit stamps (the titular "queens") to a shady amateur philatelist (Abadal) who’s being deported in the morning. The plot moves more quickly than a game of three-card monte, with every character potentially on the take. Of the various oddball miscreants comprising the colorful ensemble cast, Juárez is particularly delightful as the sister of the desiccated forger (Núñez) who’s authored the fakes; she’s a salty, platinum-blond broad with a studmuffin houseboy and a voice like whiskey and sandpaper. An established screenwriter and short-film director who makes his feature debut here, Bielinsky achieves a flatly realistic, street-level shooting style that is deleterious at times (as when he films a confrontation between characters in the irritating, swirling-camera style typical of an episode of ER), though other moments, such as a droll montage of street swindlers at work, are wryly amusing. Overall, the film’s breezy charm and deft narrative leave the more lasting impression. It’s surely illustrative of the film’s thoroughgoing playfulness that amidst the hall-of-mirrors convolutions of his script, Bielinsky pulls off a comic bit about the collapsing economy, a source of dramatic hand-wringing in other works from the vital and varied Argentine cinema of late, such as Lucrecia Martel’s dour satire La Ciénaga. But like its protagonists, Nine Queens is a relentless charmer with a trick or two up the sleeve.

The Aura
A sure winner for arthouse audiences with crossover appeal, Fabián Bielinsky's The Aura spins a purely enjoyable web of intrigue within a meditative, dreamlike setting.