Not reviewed at press time. Sureel is a young, first-generation Indian-American who faces telling his strict and traditional parents the real truth about his life in this low-budget indie project about coming of age in an immigrant family. His parents think he's gradutating from college pre-med, but Sureel's been studying music instead and wants to pursue his rock & roll dreams. Roll over Beethoven, and tell Ravi Shankar the news. 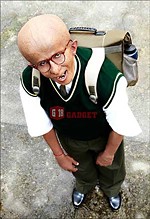 Paa
In this Bollywood film, a 13-year-old boy tries to live a normal life despite suffering from progeria, which causes him to physically age prematurely.

One Two Three
A comedy of mistaken identities provides the plot of this new Bollywood comedy.