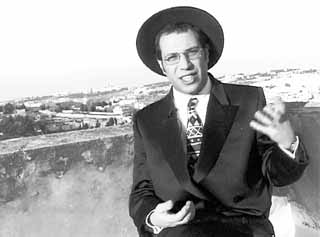 Sex and religion rarely make for the most comfortable of bedfellows. But what happens when the two urges are downright irreconcilable? That's the conundrum examined in Trembling Before G-d, a provocative documentary that shines light on a little-explored dimension of the international debate regarding homosexuality and religion: that of gays and lesbians who also wish to belong to the Orthodox and Hassidic Jewish communities. In these more traditional and literal branches of Judaism, homosexuality is condemned as a Biblical abomination. The desire to continue practicing the religion of their upbringing and adult choice is thoroughly incompatible with the religion's core tenets based on the ancient laws laid down in Leviticus. Filmed over the course of five years in Brooklyn, Jerusalem, Los Angeles, San Francisco, Miami, and London, Trembling Before G-d looks at the isolated lives of a number of Jews who have come out as gay. Their strategies for coping with and rationalizing the contradiction in their lives varies. Shunned by their families and yeshivas, these gay Orthodox Jews long for acceptance on their own terms, and wage what appears to be a life-long struggle against the intractable forces of religious dogma. Implicitly, the movie makes the viewer -- if not its subjects -- wonder if these religious beliefs can ever be reconciled with an intolerant religion. However, most of the people interviewed for this film are reluctant to give up the struggle to reconcile the two impulses. Occasionally, the viewer may want to shake these subjects into acceptance of the obvious -- their desires are irreconcilable. Yet the observation of the various conflicts, anxiety, and isolation suffered by these gay Jews makes their situation all the more poignant and real. DuBowski's skillful documentary techniques aid in creating compassion for these outsiders. Many of his subjects are filmed in shadow or silhouette, and the range of the film's commentators also includes knowledgeable rabbis, psychotherapists, and scholars. On one level these subjects come across as me-generation whiners, who want to have everything their own way and compromise nothing. However, the sadness that haunts their lives -- whether as gay outsiders, dutiful but celibate spouses, or closeted deceivers -- is a predicament portrayed with extreme compassion and stirring conviction. Trembling Before G-d ultimately calls into question belief in a God that finds abomination in an act of lovemaking.