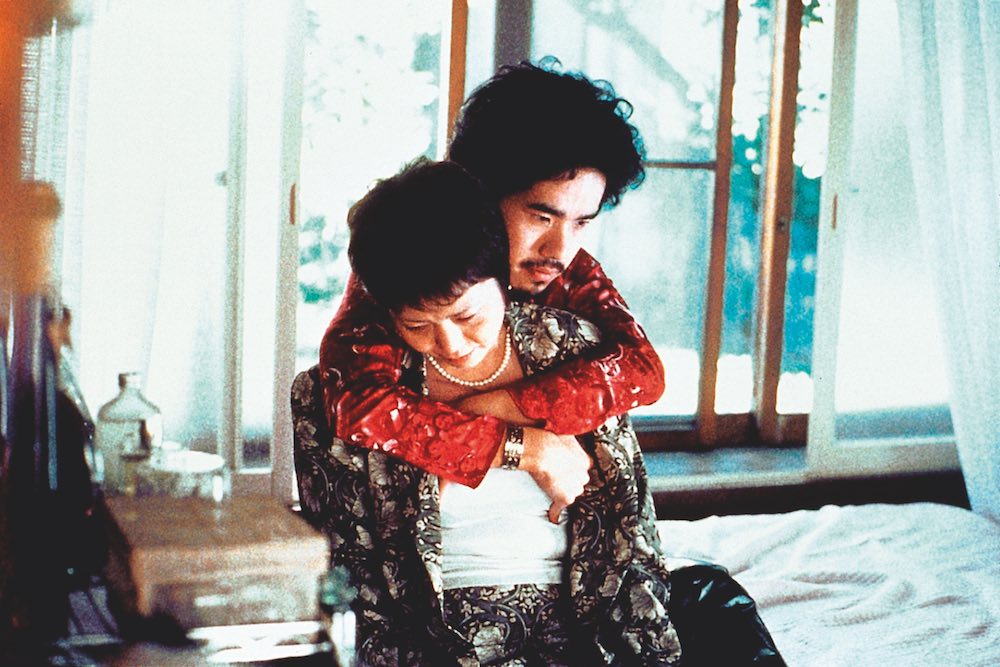 Sheesh. I'm still recovering from last year's Miike film to play Austin -- the mind-warping, soul-blighting Audition -- which arrived stateside bearing little indication of the horrors contained within. This time out I was familiar with Miike's absurdist-pornographic style and had even been forewarned by a trusted film pal who casually told me, “Dude, that's some fucked-up shit.” Truer words, my friends, have rarely been spoken. Miike, Japan's answer to Al Goldstein on a vicious PCP bender, has made a career of not only tackling taboo subjects (taboo in the West, anyway) such as necrophilia, extreme sadomasochistic sexual athletics, and the terminally icky fetish coprophagia (look it up), but also of gleefully rubbing viewers' faces in the puerile and the ghastly. His films -- lovingly shot and expressionistically lit -- tend to sneak in under unsuspecting viewers' radar; they look like regular films, and his characters, for all their hellish, downward-spiraling foibles, appear outwardly normal. His films are filled with salarymen and J-pop refugees adrift in a cultural climate that has reduced the Land of the Rising Sun to so many paved carparks and stinking spillways. Visitor Q is, if anything, more of an offense to the eye, mind, and spirit than its predecessor. Of course, it's also a rollicking good/bad time that offers -- if you care to peer closely enough into its maggoty recesses -- a genuinely subversive take on the modern Japanese family, the intrusive nature of the media, and social dynamics of all stripes. Miike's film makes classic arty shockers like Pasolini's Salo: 120 Days of Sodom look like a kooky travelogue, but like Salo and, say, the much ballyhooed, now laughably retro I Am Curious, Yellow, Visitor Q has a serious sociopolitical voice buried within its festering folds. Kenichi Endo is the patriarch of a suburban family (exactly where the suburb is, we're never told; it could be anywhere in Japan or elsewhere, and that's likely Miike's intention) who, as the film opens, meets his young daughter in one of the country's cramped “sex hotels,” ostensibly to conduct an interview with her about her life on the street as a teen prostitute. “You want to know about the youth today?” she taunts him. “They are the future. That hopeless future.” Since this is a Miike film the familial pair don't pursue a rational inquiry into the topic, but instead engage in some labored, energetic coupling, which the father videotapes, after dutifully paying his offspring her due. Back at home, the situation is infinitely worse. Mom is routinely battered by her son (Uchida) and finds refuge in everybody's favorite anxiety obliterator, heroin, while the household is blasted with fireworks by a roving high school gang eager to make meat pies out of junior. Enter Visitor Q (Watanabe), who arrives in an almost farcical blaze of glory (he beats dad senseless with a rock) and introduces the brood to a whole new level of bloodshed, sex, and, everyone's favorite fetish, out-of-control lactation. Be advised: Visitor Q is a harrowing piece of work that makes Alex's rampages in A Clockwork Orange look tame by comparison. If you can stick it out, however, Miike's sordid rape of the Ozzie and Harriet myth is a worthwhile, albeit repugnant, descent into the current subconscious mindset of Japanese culture.