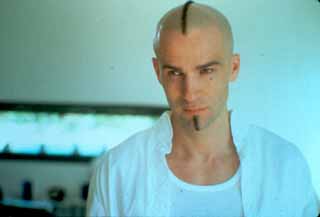 The Art of Dying

Slick and intermittently creepy, The Art of Dying is a sort of I Know What You Did in Spain Last Summer that borrows heavily from both American and Italian genre films, from its teenage protagonists who can't go to the cops for fear of revealing their culpability to the bouncing, jouncing club hang-out scenes that now and again jolt the otherwise predictable plotline to life. Fernández Armero is part of what appears to be a Spanish(-language) horror filmmaking renaissance, alongside Alejandro Amenábar (Abre los Ojos, The Others) and Alex de la Iglesia (Day of the Beast). He's made a slick and stylish thriller with supernatural overtones that owes as much to Wes Craven as it does to Dario Argento. In fact, it's a melding of those two directors' wholly unique styles that makes The Art of Dying as watchable as it is. Fernández Armero cribs liberally from Michele Soavi's palette, investing the frame with saturated colors and turning the film's many night scenes into shadowy, blue-gelled set-pieces which tend to engulf the characters wandering through them. The film looks terrific -- when it's firing on all of its blood-soaked cylinders, it's impossible to take your eyes off the screen. However, the script by Juan Vincente Pozuelo and Francisco Javier Royo feels cobbled together from any number of mid-Eighties to mid-Nineties slasher pics (even the characters feel as though they were penned by Craven on a bad day). It's a retread of genre tropes chosen seemingly at random from any number of slasher films, and although Fernández Armero's smooth direction keeps The Art of Dying from being a total wash, it's still lacking the visceral, self-mocking punch of the Scream series and the relentless drive of John Carpenter's Halloween. Martínez plays Ivan, the sensitive best friend to Salmeron's Nacho, a death-obsessed artiste with delusions of coolness. Along with friends Clara (Esteve), Carlos (Collado), Ramon (Peris-Mencheta), and Candela (Pataky), Ivan and Nacho spend a weekend at a crumbling country house. Nacho, sporting a razor-thin mohawk and goatee, is resented by the others for his art-at-all-costs attitude (he's the sort that sneaks into morgues to snap photos of dead junkie babes for later artistic inspiration). Speaking to Ivan, he dismisses the circle of friends as “worthless,” and it's apparent that they feel similar ambivalence toward the hipster artist. The weekend concludes about as badly as possible, with a dead Nacho and a cluster of terrified teens struggling to keep this accidental murder a secret. Cut to four years later: One by one the friends begin to die in inexplicable ways, while Ivan begins to see a ghostly Nacho on the periphery of his life. Is his conscience driving him mad or is there really some supernatural force at work? It doesn't matter to Fernández Armero, who keeps piling up the bodies and the austere, minimalist production design. The spare look of the settings is likely a nod to the Argento school of interior design, which always adds a dollop of grue to any undecorated wall space, and one shot -- of a menacing figure backlit by a flaming doorway -- is straight out of Friday the 13th. Unfortunately, The Art of Dying, for all of Fernández Armero's attention to detail, just doesn't have that series' toothsome bite (an increasingly tedious and gummy chomp, sure, but a chomp nonetheless). It's so faithful to the pre-existing genre conventions that it ends up a hollow echo of previous stalk 'n' slash films.