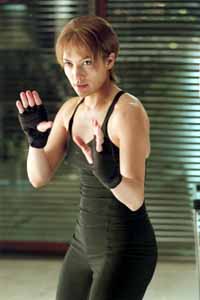 As the film opens, if you listen very carefully, you can almost hear the narrator intoning, in a voice grave and forbidding: “Slim thought she had it all.” Dun, dun, dunnnnnn. The “had it all” part is established in quick expositional chunks: Waitress Slim (Lopez) is wooed by Mitch (Campbell), who promises to keep her safe. He marries her, buys her a dream house, has a daughter named Gracie (Allen) with her. But when Mitch's infidelities become increasingly apparent, Slim protests and threatens to leave. That's when the beatings start. That's when Mitch's nice guy morphs into major sicko, armed with the money, connections, and smarmy good looks to make sure Slim has no alternative but to stay with him. But eventually, enough is enough. (In case the title hadn't already spelled it out, the film uses rather silly cue cards that broadcast what direction the next scene will go in; “More Than Enough” needlessly clues us in to Slim's plan to flee with Gracie.) And so she does, launching the film into its second act -- thriller mode -- as mother and daughter assume new identities. Mitch the hunter trails Slim the hunted as she darts across the West Coast like a jackrabbit, just a fluffy bunny tail's length away from the chomping, clomping jaws of death. Jack-of-all-trades director Michael Apted (The World Is Not Enough, Gorillas in the Mist) capably delivers the goods both action and dramatic, although scripter Nicholas Kazan too often goes for hokey. And Lopez does a fine job as the terrorized woman fighting for her life -- by now it's clear that Mitch doesn't so much want her back as want her dead. As he gets closer and closer to snaring the mother and daughter, Slim's vengeance starts to creep out -- 'cause, come on, enough is enough already -- and Lopez is never better than when she's a steely warrior poking holes in the pretty-girl veneer. That's why it's such a kick when Slim trades in her damsel-in-distress routine for some serious ass-kicking. She goes into intensive training, studying the deadly Krav Maga, a type of martial arts used by the Israeli army. We know where this is going, the tagline nudging us: “Self Defense Isn't Murder.” Sure, but is it self-defense when you pre-plan your attack with precision and relish? When you bait someone to kill you so you can kill him first? Enough doesn't really linger on the ethics of the situation, and besides, it already has an easy out: Mitch is an abusive lout. He deserves to die. Case closed. (Had the film attempted to make Mitch a more interesting, more psychologically complex character rather than this manifestation of pure evil, then it might not have been so simple.) The final showdown is a bloody, ugly mess, and scarily exhilarating, too. Enough inspires the same crazy adrenalized bloodlust of Fight Club -- another film that justified brutal violence by saddling it to an issue. The senseless violence of a Jean-Claude Van Dammer, no point to that, but this, this has purpose. This is an ass-kicking a girl can get into. So why do I feel like crying mea culpa?