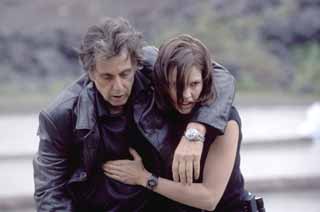 The question of how maverick filmmaker Christopher Nolan could possibly follow up his arthouse smash Memento has finally been answered. He's followed it up admirably with his new film Insomnia, a reworking of a 1997 Norwegian psychological thriller of the same title. Insomnia can't possibly match the authoritative narrative stylistics of Memento, but it sure makes a strong case for the value of smart, daring filmmakers in Hollywood. With this studio-backed venture (fittingly produced by rule-breakers Steven Soderbergh and George Clooney's Section Eight company), Nolan proves that he can cross swords with the best of them and helm a more traditionally plotted popcorn thriller while surrendering little of his intellectual rigor or creative composure. Insomnia stays fairly true to the outline of its original model, an international arthouse success that was directed by first-timer Erik Skjoldbjaerg and stars Stellan Skarsgard (Breaking the Waves). The changes made in this American screenplay adaptation (by another first-timer, Hillary Seitz) actually provide some provocative enhancements to the story that offer motivational explanations where previously there had been none (which is not necessarily a bad thing, just a more “European” approach to behavior rationales). The newly added motivational aspects, however, are not slapped all over the film rendering it over-explained and predetermined. Instead, they add a further dimension to the story and the characters' relationships, making the events even richer with possibilities and perspectives. Additionally, switching the story's location to Alaska from Norway retains the film's salient characteristic: the 24-hour sunlight that haunts the central character -- a police detective called in to help solve a heinous crime in a small town. The constant sun disturbs his sleep and consequent disposition, hence the film's title. Pacino yet again plays a detective, this time an LAPD cop named Will Dormer, a man clearly more at home in the world of film noir than in the land of the midnight sun. Dormer is a man of increasingly apparent moral ambiguities, unlike Skarsgard's original, who comes across as an unconscionable rat. Robin Williams seems to be making an all-out attempt to vanquish Patch Adams by playing his third villain this year (Death to Smoochy and the upcoming One-Hour Photo), and it's now becoming somewhat predictable. These two men become caught in a pas de deux of moral relativism and they -- and the movie -- are at their best while attempting to navigate the proverbial slippery slope. Nolan focuses on unwrapping the story and (with the help of Memento team members, cinematographer Wally Pfister and editor Dody Dorn) creates an effective thriller, although he keeps his stylistic pyrotechnics to a minimum. Only a near-drowning scene when Dormer is trapped under a pile of floating logs shows off the director's technical skill. Insomnia bodes well for Nolan's future, however. This is one director who's not asleep at the wheel.