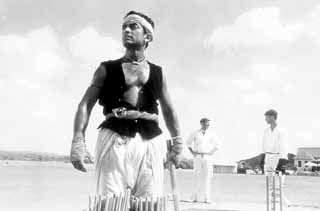 Lagaan: Once Upon a Time in India

Once upon a time in America I would have scoffed at the idea of my falling in love with a nearly four-hour-long movie from India's prolific Bollywood film industry -- a movie whose centerpiece, no less, is a 75-minute-long cricket match. But that was before I saw Lagaan: Once Upon a Time in India, a movie that amply delivers on the epic promise of its title, entertaining, enlightening, and emboldening viewers with its deceptively simple premise and execution. Although Lagaan is sure to look foreign to Western eyes, this crossover movie is hardly a typical Bollywood production with its toned-down flash and dazzle, muted colors, greater psychological realism, and use of synch sound and location shooting. Produced by its popular Indian star Aamir Khan, Lagaan has proved to be a massive success at home and abroad. Reported to be the most expensive Bollywood musical produced to date, Lagaan appears to be delivering on its cost by crossing over into the untapped international arthouse audience. The story is set in 1893 in the central Indian village of Champaner, whose people are suffering from drought and the high taxes -- or “lagaan” -- they are forced to pay to the local rajah, who, in turn, delivers most of the money to the British overseers, whose area encampment is headed by the imperious Captain Russell (Blackthorne). The villagers, led by Bhuvan (Khan), unite to request a moratorium on the lagaan in light of the draught, but Russell responds with a cruel proposition: The lagaan will be canceled if the villagers manage to beat the British in a game of cricket, but if they lose the lagaan will be tripled. Of course the villagers are completely unfamiliar with cricket and must learn the game from scratch. They are helped in this David-and Goliath venture by Capt. Russell's sister Elizabeth (Shelley), who objects to her brother's cruel edict and also takes a shine to the bold and handsome Bhuvan, a turn of affairs that ruffles Bhuvan's long-suffering sweetheart Gauri (Singh). This being a Bollywood picture also means that the characters break into stylized song-and-dance numbers with great frequency -- six times, to be exact. Here again, however, Lagaan breaks with the conventional Bollywood format by having quotidian events like an oncoming rainstorm spur the musical numbers to life instead of the formula's more usual religious or ritualistic promptings, and also using the outdoor locations and more free-form choreography. In only his third feature film, director Gowariker directs Lagaan with assured storytelling skill, detailing the story's many characters, tensions, and rivalries with deft coherence. Despite its running time, the film never lags or becomes overburdened with characters, its ochre color palette echoing the scorched earth that suffuses the film and its cinematography and editing expeditiously guiding the story toward its epic pinnacle -- the cricket match that could almost become a gripping movie in itself, so stirringly is it shot. A villager is wisely used as a conduit for explaining the mechanics of the game to the others as it unfolds, so that there's no chance of audience members being left in the dark regarding this classically British pastime. The actors all do a remarkable job of lending a strong measure of believability and humor to their archetypal characters. Lagaan is as rousing a tale as is likely to come around in a while -- a story of the little guys taking on intractable political forces, a love story that pricks the dogma of racial barriers, and a sports drama that effectively uses the game metaphor as a central motif. Lagaan depicts the eternal drama of the citizens' fight against city hall. All this, and an intermission too. 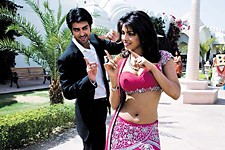 What's Your Raashee?
From the Indian director of Lagaan: Once Upon a Time in India comes this confection in which a a young man's romantic ideals meet up with reality. 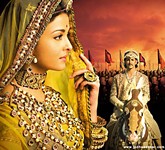 Jodhaa Akbar
From the director of Lagaan comes this masterful Bollywood epic about a 16th century marriage of political alliance that gave birth to true love.