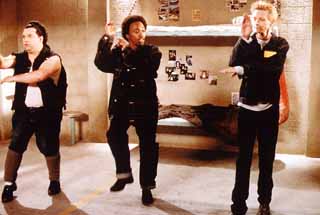 Among the touted highlights of this filmed-at-Austin Studios teen movie are cameos by Vanilla Ice, Tommy Lee, David Hasselhoff, and Gene Simmons. With hints like these, it seems almost a redundancy to state that The New Guy is a very bad movie. Completed a while ago and shelved ever since, The New Guy will try to capitalize on its PG-13 raunch on this weekend situated between the openings of Spider-Man and the new Star Wars. Actually, The New Guy is much less raunchy and surprisingly sweeter than expected, having gauged my anticipation against the standards set by the previous teen-geared pictures from producing company Revolution Studios -- Tomcats and The Animal. The film tells the story of Dizzy, a high school senior (Qualls) who is tired of being an abused blip on the radar in his current high school setup. So, taking some advice from a prison convict (Griffin), he gets himself expelled, has a physical makeover and a personality change, renames himself Gil, and attends a new high school, where he instantly becomes the hottest thing around. Qualls, whose natural comedic moves were so memorable in Road Trip, is probably up to the fictional conversion, but The New Guy is so dull that it makes us suspect that Quall's best moments remain in the outtakes. The screenplay by David Kendall is incoherent and confusing, and sequences follow each other despite huge gaps in logic. The prison sequences make no sense whatsoever. How Diz/Gil arrived there, and how he comes and goes at will are issues that are never addressed or acknowledged. Little makes sense in this movie, and it's astonishing to think that such a mess could be filmed without seeing the gaps and flaws. One shouldn't have to struggle in order to follow the plotline of a movie such as this. That's a truly bad sign. On the other hand, The New Guy resists the temptation to fall into pure nastiness by having Diz/Gil rally the two schools into a field day of togetherness and peer acceptance. On a local level, some of the location shooting at places like the Lakeline Mall, Coupland's, and the Broken Spoke are fun to see. And in an inspired bit of casting, Lyle Lovett plays the dad of the goofy-looking Diz/Gil. That these two could be related might be the only believable touch in this whole misfired thing. 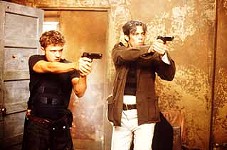 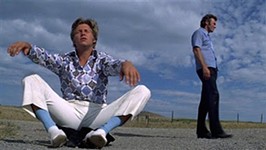