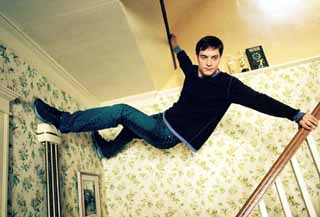 It must have seemed like a terrific gamble when the suits at Columbia elected to go with director Sam Raimi's first choice for the role of New York's finest webslinger. You can see the puzzled looks and a grimace or two if you squint your mind's eye; “Tobey Maguire? That Ice Storm kid? Are you nuts?” Thank goodness Raimi won that one, though. From his first scene on, Maguire owns the role, and thanks to a fine, goofily heartfelt script by David Koepp, and some restrained-yet-punchy direction on Raimi's part, this is perhaps the most spot-on film adaptation of a comic book superhero yet. Fans of Marvel Comics' beloved red, black, and blue arachnoid teenager should have a field day; Raimi perfectly captures the essence of the early Spider-Man issues, from Stan Lee's wise decision to make this high school outsider one with whom the kids could really identify instead of a galaxy-hopping Superman, to Steve Ditko's surreal, odd-angled panels and wild, action-crammed splash pages. Maguire, with his croaky, pubescent voice and hunchy science nerd charm, might as well have walked in from of one of Smilin' Jack Kirby's old issues -- he looks like the penultimate geek-cum-boy wonder, and when he is finally bitten by a genetically enhanced spider while on a school field trip (an amateur shutterbug, he spends the trip shooting pics and spouting off about the myriad unique properties of the spider exhibit around him, as if simply being a spotty-faced 98-pound weakling weren't trouble enough), the resulting transformation from gawky science whiz into spectacular spiderguy is all the more fascinating. Koepp's script excels in other ways, too: The film sets up a single arch-villain for our hero to vanquish. As the Green Goblin and his marginally more benign alter-ego, scientist Norman Osborn, Dafoe fluidly shifts among playing loving father to son Harry (Franco), ambitious Oscorp Industries CEO and chief scientist, and the armor-clad Goblin, who spends most of his screen time zooming around on his sporty hoversled and tossing exploding thingamajigs at all and sundry. What else is there to love about Spider-Man? How about Dunst's Mary Jane Watson, Peter Parker's one true love “since the fourth grade,” who, with her crinkley smile and pale redhead's skin tones, manages to look both alternately beatific and drop-dead gorgeous, often in the same sequence. There's also J.K. Simmons' note-perfect take on Daily Bugle editor J. Jonah Jameson. With the ever-present stogie clenched in his career newsman's lantern jaw, the salt-and-pepper flattop, and the rapid-fire, take-no-prisoners delivery, he's another Marvel archetype brought to thoroughly believable life. Spider-Man isn't perfect, but it's head and shoulders above so many other superhero flicks of the past 10 years. Raimi's ginger direction stops just shy of the apocalyptic knock-down, drag-out, battles royal of, say, Superman or The X-Men, and at times the film feels like it's holding back when it should be kicking out the proverbial jams. Still, there's a real joy and sense of exhilaration, though, to many of Spider-Man's CGI webslinging sequences, even if those computer graphics don't always live up to expectations. With centrifugal force on his side, Spider-Man dips, weaves, and whooshes past, up, and around the camera -- it's a rush, and it plasters a grin on your face even after you've left the theatre.