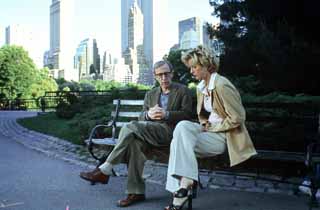 After 30-odd films, a director probably deserves the occasional freebie. The mostly applauding press seems to agree, as does the admission board at Cannes, who've awarded Hollywood Ending its opening night berth. Woody Allen, too, is in concurrence, with his very title exonerating him from having to produce a convincing conclusion. It's kind of a cheat, but then, a lot of what Allen does amounts to a cheat: He casts himself as another slight variation on the neurotic New Yawker Jew we know and love, and he floods the soundtrack with the retro-romanticism of prewar jazz. Both are familiar, piggyback tacks, jogging us back to other, better Woody Allen films like Annie Hall and Hannah and Her Sisters. It's unfortunate that, as a living master, Allen's every new work must be compared to what came before, so that it may settle like sediment into its proper place in the pantheon. Unfortunate … but irresistible: Hollywood Ending isn't as wretched as Celebrity, nor as majestic as Manhattan. In plot, it's closer to the former; in spirit, it strains for the latter and fails. Much of the humor in Hollywood Ending comes from Allen's lampooning of the studio system and its suits in this story of has-been director Val Waxman (Allen) who, when given a last chance by studio head Treat Williams, becomes psychosomatically blind for the duration of the shoot. Knowing this is his last gasp for glory, Val and his ever-devoted agent (a fantastically fawning Rydell) labor to conceal Val's blindness from the cast and crew, enlisting the Chinese DP's translator (Cheng), as co-conspirator in a profitable running gag. But in the film's last third, Allen drops the initial (and successful) slapstick comedics in favor of a furrowed-brow, soul-seeking dramedy, and the film loses its charms. Not all, mind you: Allen would have to be rendered comatose before all his charm was sapped. But he begins to stretch toward sentimentality, contorting his character into an ill-fitting redemption. The gassy subplots pile up and the film surrenders its pacing, its forward thrust. The blind-man routine, too, never achieves its manic potential. Part of Allen's comedic gift is his split-second snap with other actors; the blind schtick robs him of that, and the female leads suffer the most. As usual, Allen has surrounded himself with a bevy of beauties. (As usual, they're 30 to 40 years his junior.) Messing, as Val's ditzbomb girlfriend, and Leoni, as his producer and ex-wife, are terrific physical comedians, both having cut their teeth on sitcoms (Will & Grace and The Naked Truth, respectively), where they were both rightfully fingered as Lucille Ball reincarnates. But there's nothing for them to do here. Messing is yanked early, banished to an offscreen spa; her triumphant return is one of the film's giddy highs, the vapid giggler slapping her slimmed stomach repeatedly to show off her new abs. Leoni has more screentime, but must play the straight woman to Allen's nutjob antics, in a role that is dutiful and dull. Only in spastic, sublime bouts is she allowed to strut her stuff, made all the more difficult by Allen's shot choices. Afforded few close-ups, Leoni must deliver a good deal of her lines with the back of her head, always pushed to the edge of the frame in favor of Allen, when she should be front and center. That's the ultimate cheat in this pleasant, but trifling affair: Allen has cheated himself out of an actress that could have been Diane Keaton's heir. (See related interview with Woody Allen on p.50 of this week's Screens secction.)